For our customer story this month Miss Rogers tells us about her lovely horse, Melody, who is a 15 year old, 16.1hh, thoroughbred ex-racehorse. Melody has been through quite a lot over the last year. Here is what her owner Miss Rogers shared with us:

‘I saw her in a stable one day back in 2010 and agreed to take her on. Within a few months we were doing the rounds at local shows and even managed to win a racehorse to riding horse class. She’s definitely not an easy horse in any way and likes to test you from time to time – mostly when you’re not expecting it.  Although at the same time she also knows when she needs to be sensible – like the day I got kicked and could not pick myself up from the ground. I quite literally used her to pull myself back to my feet, and she did not move. 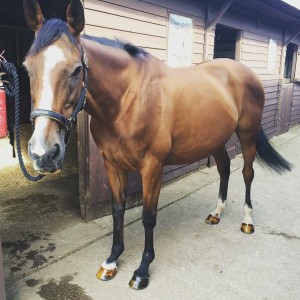 Melody and I have had a go at everything, however my favourite thing is to open her up on the beach; she has an extra gear that my previous horses just didn’t have. I am lucky enough to be within hacking distance and cannot wait for the day we can get back down there! 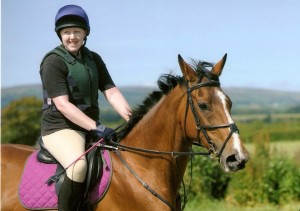 Her favourite thing to do is eat…. She is especially partial to a pear and/or an extra strong mint and my family make sure she’s supplied with as many treats as she wants, including drilling holes in many swedes to tie up to help prevent the boredom during box rest! 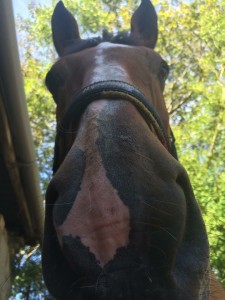 In April 2015 something wasn’t right. Melody was slightly lame for a few days, then it would go away. It kept coming back intermittently. After a couple of weeks I got the vet out. After numerous visits the cause still wasn’t identified. During all of this I was also changing jobs and moving house. Once in the new area I booked a visit in with a different veterinary practice for September. To make things more complicated, a couple of weeks before going for our check up she was being groomed by my brother and as he went across her back she tried to kick. Kicking is completely out of character so I knew something wasn’t right. As we were off to the vets anyway, I asked them to have a look over her back at the same time.

We did the trotting up/lunging etc, and then she went off for multiple x-rays. The verdict was that she had problems in her stifles and bony growths could be seen which would require an arthroscopy for further investigation and treatment. The x-rays also revealed that she had kissing spines and was also experiencing arthritic changes in her neck, which was most likely causing impingement on the spinal cord. This was a lot of information to take in and I really didn’t know how we would begin treatment. The vet team were fabulous! The first things to treat were the stifles. She had the necessary arthroscopy done the following week with some cartilage being removed to make the joints more comfortable. She also had to wear some wedges requiring visits from my farrier every three weeks. These have now been taken off this month (now January). During the same stay at “hospital” she also had her neck injected with steroids and then required follow-up physio appointments. The period of box rest has been tough… due to her being so messy in the stable, and also the longer she goes without work the more fed up she gets! She had a little bit of time outside in a small paddock and particularly enjoyed herself one day, rolling in a mud patch! 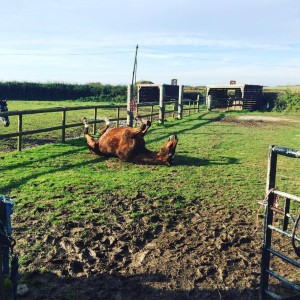 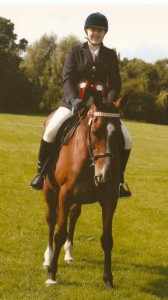 After enough time had passed she was reassessed to ensure the stifles had healed sufficiently to be able to do the rehab required following the kissing spines op. Melody was given the OK and she went in for the less invasive standing kissing spines procedure on 11th December, where she was treated in eight places. This was followed up by sacroiliac injections between Christmas and New Year. She was ready to start small paddock turnout two weeks after the op, but she had other ideas – jumped straight out and into the field with all the others, so we gave up on that and have now come up with an alternative after seeking advice from the vet.

We are currently almost four weeks post op and following the rehab plan as best we can with the weather! The plan is to have her reassessed six-eight weeks after the op and if all is OK, I will be allowed to get back on her. I have to be honest, that is a day I’m not looking forward to!

The last six months really has been the worst of all the time I’ve ever owned horses. I always said I would never put Melody through any unnecessary surgery and the first few days after the arthroscopy were heart-breaking. She lost a lot of weight and condition, due to not really wanting to eat and I really questioned whether I’d made the right choice. Looking back, it was most likely due to the pain killers she was on! From the beginning when I first contacted Animal Friends in May 2015 everyone has been really helpful and have shown genuine concern for Melody. It became more complicated when the second claim was started and now have the two running! I have emailed and phoned more times than I can remember and have only received excellent service, no matter how trivial I thought my enquiry was. The worry of having to fund Mel’s treatment was taken away, which was a massive weight off my shoulders. Because of Animal Friends I have been able to ensure that Mel has had the best treatment, with nothing spared. I have no hesitation in recommending Animal Friends to anyone and have done so every time someone asks me about horse insurance companies.’

Considering pet insurance but not ready to buy yet?

Why do Horses Buck?

The UK’s Most Pampered Pets