Your name and department:  Josh – Marketing

Your pets’ names:  Bubble and Fizz 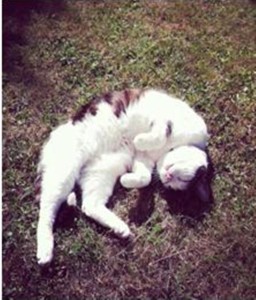 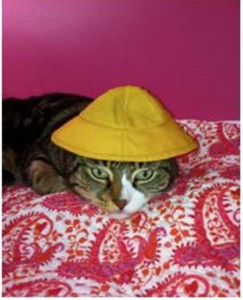 What are their favourite…

Toys:  Nothing for Bubble.  He’s only interested in food.  Fizz likes shiny things – Christmas is a nightmare!

Food:  Bubble is into spaghetti Bolognese, ham, cat food, cheese, whatever he can get his paws on. We have to share our butter with him because he flips the lid off and stuffs his face!

Fizz will eat anything and everything!  I’ve even seen him try to eat vegetables….

Tell us your favourite story about your pets:

Bubble is a real cool cat.  He has many ‘tails’ to tell but the one that comes to mind quickest is when he came back from the vets after he’d had morphine… he was super spaced out!  I’ve also caught him drinking out of the toilet!  I’m sure that he once said ‘hello’ to me during a meow.

Fizz doesn’t have a particular story but he loves a good box. The amount of times we’ve found him in the most ridiculous box… that’s usually far too small for him. Oh, and we just moved and had a new cat flap put in – I watched him test it out:  it was 50/50 as to whether he was going to fit through….  He got through just fine though.

Fizz has never been ill but unfortunately his brother Bubble once had what we think was some sort of abscess on his side, which, after taking him home from the vets, he managed to pop or burst himself – leaving a huge gaping hole in his side. He got cleaned up at the vets and made a full recovery. Recently he’s been put on special food and is on medication because he has a thyroid gland problem. We are feeding him whenever we can though because he needs fattening up! Not to Fizz’s extent though… although we do always give in to him when he sits there looking all sad whilst Bubble is tucking into some juicy meat!