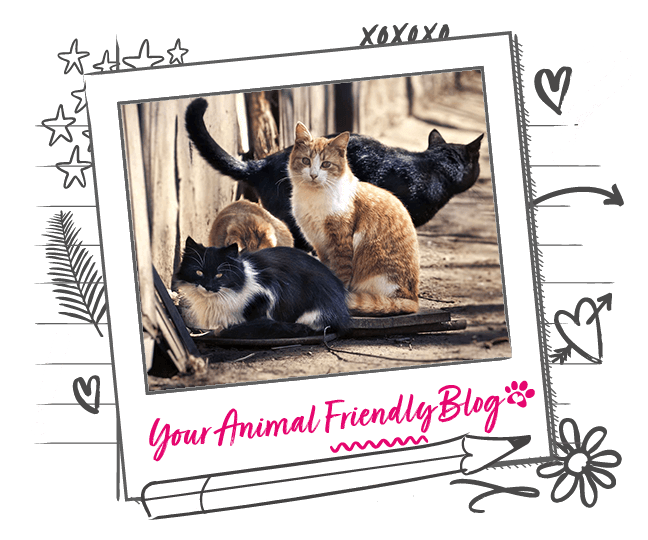 Stray and feral cats may look the same on the surface, but there are various obvious and subtle signs based on appearance and behaviour that set them apart.

On the surface, stray and feral cats appear to be the same in that they are both animals without a home with humans, and each are descendants of domestic cats. However, there are various obvious and subtle signs based on appearance and behaviour that can help you to distinguish the difference between them.

A stray is an animal that once had a home with humans but no longer does. They may have got lost or been abandoned by their previous owner. Usually more friendly and approachable than a feral cat, they might allow you to touch them. Their coat will probably be dirty, as the stress of having to fend for themselves can cause them to neglect their hygiene. Strays are more likely to make eye contact and exhibit friendly body language, such as a raised tail. They are usually found in areas close to where humans are, and tend to roam alone as opposed to feral cats, which live in colonies. A stray may be able to live with humans again.

Despite this, they aren’t necessarily going to be approachable or friendly to begin with. They might have had bad experiences with humans, either before or after they became a stray, which could make them less likely to trust you. In this case, try to gain their confidence by befriending them.

Before you decide you want to keep a stray cat, you must do everything possible to locate their owner. Start by taking them to the vet where they can be scanned for a microchip. If this is unsuccessful, advertise in your local area that you have found a lost cat. You can take the cat to a shelter for rehoming if no one claims them, and you are unable to care for them yourself.

Feral animals are born in the wild and have never had a home with humans. As such, they are able to look after themselves. It can be extremely difficult to socialise a feral cat once they have matured, but kittens can be rehomed as long as this is done so early enough in their lives. They are less likely to have been spayed or neutered than a stray, so a pregnant cat is probably feral. One way of recognising a feral cat is if they have a V-shaped split at the top of their ear or if the tip appears to have been sliced off, as this indicates they have been trapped, neutered and released. Also, their coat will be clean compared to a stray’s.

Typical body language and behaviour from a feral cat would include avoiding eye contact and crouching close to the ground, whilst protecting their body with their tail. Feral cats usually live in colonies and tend to stay away from areas where humans are prevalent, so they may appear frightened or aggressive when approached. Something as simple as reaching your arm out to them could be perceived as a threat, so expect a feral cat to run away when confronted by a human. They tend to live in areas where food and shelter are readily available, near bins, barns or in abandoned buildings.

Some feral cats are able to share a home with people, but this is quite rare after a lifetime of living wildly. They may be able to establish a bond with a human, for instance, if someone left food and water outside for them. However, their fear and lack of socialisation means it is unlikely this would become a permanent home.