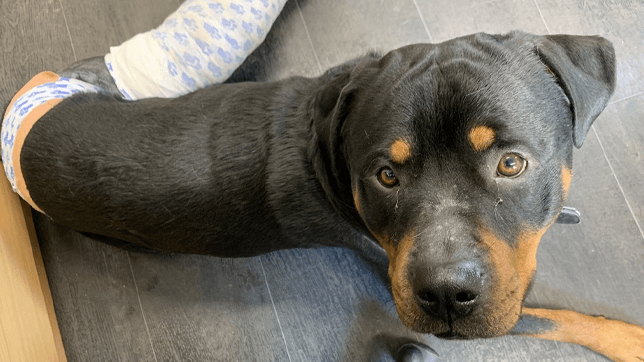 Jo Scott R.V.N and expert animal behaviourist, has written a blog for us about her dog, Dude, and his cruciate ligament injury and recovery.

Like many athletes/sportsmen injury to cruciate ligaments can occur in our dogs, the main difference being that in humans it is often a sudden injury whereas in dogs it takes longer to develop and is more likely due to degeneration over time.

Some breeds are simply more prone to this, like our dog “Dude” the Rottweiler. Other causes can be weight, age, poor physical condition and conformation. It is also quite likely that when a dog has had the condition in one knee then at some time the other one will be affected too.

The first sign we noticed in Dude was an intermittent lameness which gradually progressed. Dude is a well built, physically fit young dog but his breed was most likely the reason why he developed this condition. Other symptoms can include difficulty rising from a sit, trouble jumping into a car, unwillingness to play, a swelling on the inside of the leg/knee, pain and stiffness.

X-rays confirmed the problem and our initial line of treatment was very strict rest for six weeks to see if that would resolve it, sadly not to be. To be honest, keeping an adolescent Rottie quiet was not the easiest of options anyway! 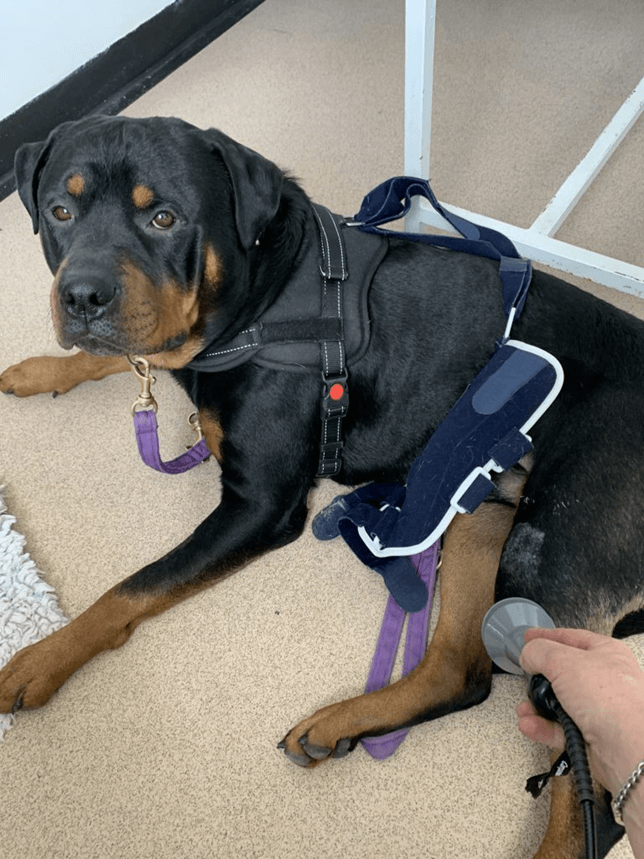 The next stage was an operation to repair the damage, it is very uncommon for the actual ligament.

Itself to be repaired most surgery involves a reconstruction of the joint to enable normal function. The two surgical procedures that are most likely to be used are TTA or TPLO.

TTA (Tibial Tuberosity Advancement) moves the attachment of the muscle forward, and TPLO (Tibial Plateau Levelling Osteotomy) rotates the slope of the shin bone for the same effect. The decision rests with the veterinary surgeon but is usually taken with consideration for the individual dog with factors such as age, breed and condition.

At the same time, Dude had a small amount of fat tissue removed for Stem Cell Therapy for tissue regeneration and repair, and blood taken for Platelet Rich Plasma Therapy.

Stem cells are very powerful healing cells and can become other types of cells, and are removed from the fat and injected back into the damaged area. Platelet Rich Plasma helps to reduce inflammation and encourage healing.

Immediately following his operation it was really important that Dude was kept very, very quiet while the bone and joint started to repair, six weeks being the most crucial postoperative time, but twelve weeks being the time needed.

Dude had some laser therapy to encourage cell repair and wore a brace to help immobilise the joint in the early stages. Following this, he had very slow controlled exercise sessions and physiotherapy.  In a multi-dog household like ours, this in itself posed a few problems, to say the least, but it is the most crucial part of his rehab. Shortly he will be starting hydrotherapy, in the underwater treadmill initially, then progressing into the pool.

Three things we have been extremely grateful for during all this are the skill of Vaughn Stoman our veterinary surgeon, the fact that Dude has pet insurance and finally that he is such a calm and accepting dog, a real cool Dude!