Summer is fast approaching and it is inevitable your pet will encounter more insects, some of which can bite or sting. This may be when out for a walk in the countryside, passing a neighbour’s flowerbed, or even whilst in the home.

Although we do what we can to protect our pets it can be difficult to monitor their every move, so they may be unfortunate enough to experience this at some point during their lives.

We have put together a guide outlining some of the most common stinging and biting insects that you will find around this time of year and in the summer, plus how to treat them. 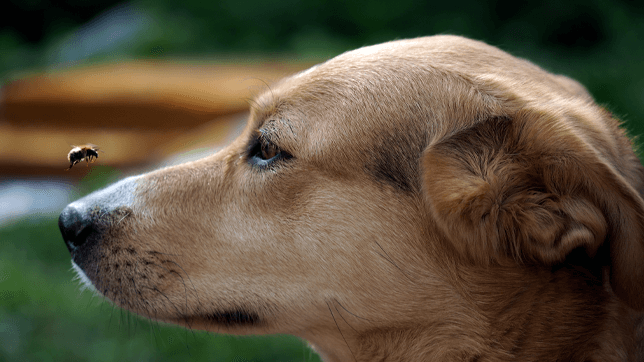 Wasps are notorious for their harsh sting, more likely to be administered when provoked. Unlike bees, they have the ability to sting repeatedly. An unsuspecting pet may poke their head into a flowerbed where a wasp is flying about, or be attacked when trying to chase and catch it.

An easy home remedy is to apply something acidic on to the affected site. This neutralises the alkaline poison released at the point of the sting, which is the source of pain. Vinegar and lemon juice are good examples of what can be used.

The pet may go into anaphylactic shock as a result of a wasp sting, so be sure to monitor them closely afterwards. They may need emergency treatment if there is a large amount of swelling away from the site of the sting on other areas of the body, difficulty breathing and any signs of weakness.

Repeated stings need to be addressed straight away, as they can cause severe damage to the kidneys or even prove fatal. Animals can be more sensitive to the venom than humans.

If your pet has been stung inside the mouth or throat, this is potentially dangerous and needs to be treated by a vet immediately. Any swelling could obstruct the airways, preventing the pet from breathing properly. Treat this as an emergency.

Bees generally don’t sting unless provoked, and they can usually only do it once because they die after the sting detaches from the body. It is barbed and designed to remain in the skin, and can continue to release venom even after separating from the bee. You may notice it pulsating as it does this.

Refrain from removing it using tweezers or any method where you have to squeeze it, as this can cause more venom to be released. Instead use your fingernail or a hard edge, like that of a credit card.

In contrast to wasps, bee stings are acidic so a home remedy consists of neutralising it with something alkaline, like bicarbonate of soda. However, make sure you have removed the sting before applying any treatment.

An animal may go into anaphylactic shock when stung by a bee, so it is important to look for any signs such as slight swelling, raised bumps and blotches on the body, especially if your pet has short hair.

Again if your pet has been stung in the mouth or throat, this needs to be addressed without any delay because swelling could obstruct the throat, creating breathing difficulties. Treat such instances as emergencies.

Although mosquito bites are commonplace when travelling abroad, they are also present in the UK and can bite pets as well as people.

They may transmit bacteria and parasites through biting, so this is something to bear in mind more when visiting overseas areas.

Although spiders in the UK aren’t generally perceived to be a threat, you may be surprised to learn that a large number of them can bite. This tends to happen when they feel threatened, and a pet chasing after one may suffer the consequences.

Despite this, they don’t usually inflict any serious damage, but as with most insect bites or stings, your pet may experience an allergic reaction. If they do, take them to a vet straight away.

This type of parasite waits in long grass for a victim to wander past so they can attach themselves to their skin. They feed off the host’s blood and can transmit Lyme disease.

Removing a tick may be possible at home. Use a tick hook, some tweezers or something similar to extract it by gripping it near the head (the closest part to the pet’s skin) and pulling using steady pressure. Be careful not to leave any of it embedded, and place it in a plastic bag in your freezer for two weeks in case your pet has any symptoms.

The vet can then examine the tick if need be. If you don’t want to remove it yourself, your vet will be able to do it for you.

These tiny insects are extremely powerful for their minute size, and are able to jump vast heights because of their multi-jointed hind legs. Fleas can spread bacteria and parasites in their bites, which can cause itching and irritation. The majority of a flea population live in the home rather than on the animal, using the pet to feed on by sucking their blood.

You can kill fleas by purchasing treatments at various pet retailers. Remember to not only kill those on your pet but also in your home by spraying different areas. Wash clothes, bedding and curtains thoroughly, and after vacuum cleaning everywhere, empty the vacuum bag. Only by addressing those present in your home as well as on your pet will you eradicate the problem.

Although they are the bane of a horse’s life, horse flies can also bite other animals and people. This can sometimes produce a lump with an ulcer-like appearance in the centre.

They are more prevalent at the beginning of summer until the weather starts to cool down, and can be found in moist or wooded areas. They target a horse’s head, neck, belly and any other vulnerable areas.

Stable your horse when you know these flies are nearby,  as they will not follow your horse inside because they don’t like darkness. They can also be tough to eradicate using insecticides, but solutions that contain pyrethroids will help to stave them off.

Make sure to read the instructions carefully before using any products as some will not be suitable for use on or around horses. Remember to consult your vet before using any such products.

The oak processionary moth caterpillar doesn’t bite or sting, but their tiny hairs floating in the wind around late May to early June can cause allergic reactions. Touching the nest can also result in some unpleasant symptoms.

When out and about with your pet, make sure you try to repel any insects. They will become attracted by brightly coloured clothes, perfume or anything sweet smelling, and if they are drawn to you, this places your pet in close proximity with them. You can buy some insect repellent at various pet retailers.

If you suspect your pet may have been bitten or stung by an insect, or they have an unexplained allergic reaction such as swelling, then you should promptly take them to the vet. In rare cases, insect bites and stings can be fatal so they should not be ignored.