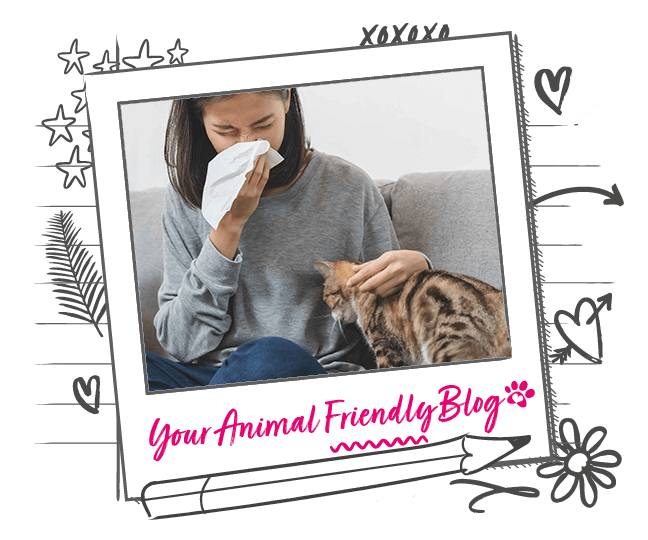 More than 1 in 10 Brits are ALLERGIC to their pets

We surveyed 2,000 UK pet owners about their allergies, and the results were eye-opening! Read on to discover the facts and figures behind these long-suffering pet owners!

It appears that Brits endure daily suffering for our pets, as one in 10 of us are allergic to our own cats and dogs!

We conducted a survey of 2,000 UK pet owners, which revealed that a whopping 13% battle through symptoms such as sneezing, rashes, hives and even difficulty breathing, to own a cat or a dog.

Out of the allergy sufferers we surveyed, frighteningly 12% have needed hospital treatment in the past to stop their symptoms becoming life threatening.

Despite the worrying stats on hospital visits, our survey also discovered that a quarter of Brits stated their allergy symptoms had improved following exposure to their pets. However, 16% admitted that their condition had gotten worse.

The Pet Foods Manufacturers’ Association (PFMA)’s stats show there are 8.5 million dogs and 7.5 cats in the UK, which shows the extent of allergy problems the UK is currently facing.

We discovered that 18-24-year-olds are the most likely to suffer with allergies, with almost 24% of respondents admitting they suffer around their pets. 55-year-olds and over are the least likely to be allergic to cats and dogs, with just 9% stating they felt the effects of an allergy.

Allergy sufferers that are desperate to own pets sometimes choose to get “hypoallergenic” dogs and cats — certain breeds that allegedly produce fewer symptoms than other animals. Our poll showed a rise in popularity of these breeds, such as the Bichon Frise and the Poodle.

Nearly one in five pet owners said they had specifically bought a dog believed to be hypoallergenic to combat their symptoms – at an average cost of £305 per pet. But despite shelling out, a staggering 40% reported to be still suffering with adverse symptoms.

When we asked Brits about their allergy history, almost half (44%) of them didn’t realise they had a condition until they bought their pet, 30% live with someone who suffers from an allergy and 36% confessed that they avoid visiting friends and even family members with pets to avoid irritating their symptoms.

When it comes to treating allergies, anti-histamines are the most common way Brits try to alleviate their symptoms (67%) followed by limiting physical contact with their pet (33%), restricting the animal to certain rooms of the house (20%) and using an air filter in the home (12%).

It’s a shame when allergies get in the way of people’s relationships with their pets. However, we would strongly advise spending time with your new furry friend before taking the plunge and moving them into your home, as this can make any allergies become apparent.

Understanding your allergies before you adopt or buy a dog is extremely important, as it can help to avoid people having to give up their animals to a shelter. Who wouldn’t want to spend a little extra time with a new pet to protect both you and them?