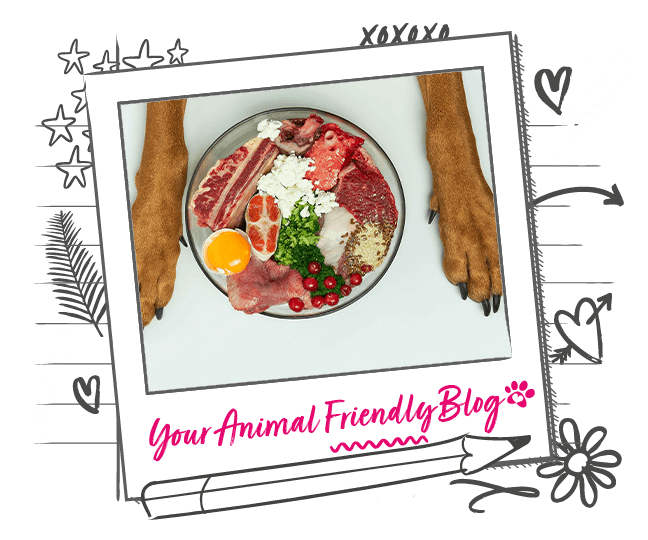 A look at what the raw food diet consists of, its pros and cons and the variations of such nutrition.

We recently conducted a survey to find out what kind of diet pet owners feed their dogs. Interestingly we found that the raw food diet had the highest figure, suggesting that this type of feeding plan is on the increase. As such I thought it would be a great idea to take a look at what the raw food diet consists of, its pros and cons and the variations of such nutrition.

A raw food diet for dogs generally includes meat (often on the bone), organ meats such as kidney and liver, raw eggs, vegetables (like broccoli), fruit, a bit of dairy such as yoghurt and whole or ground bones. Raw food diets have long been fed to dogs such as racing greyhounds but it wasn’t until 1993 that this kind of diet was thought to be a good idea for all kinds of dogs. Australian vet Ian Billinghurst proposed that the diet should be applied to all dogs, naming it the BARF (Bones and Raw Food/Biologically Appropriate Raw Food) diet and publishing his ideas in his book ‘Give Your Dog a Bone’.

This diet is a widely debated topic with strong support both for and against it.

Those opposed to the diet believe that such nutrition is risky and think that potential detriments include choking or internal damage from bones, threats from bacteria in raw meat and an unbalanced diet that has nutritional deficiencies or excesses that can cause health problems. Supporters of the raw food diet maintain that it gives dogsan higher energy levels, shinier coats, cleaner teeth and healthier skin, believing that a dog’s overall health is better served on an evolutionary diet; i.e. what they ate in the wild before being domesticated as a species.

The nutritionists that don’t agree with the raw food diet feel that owners are choosing to feed their dogs a BARF diet as a result of myths and hearsay degrading commercial pet food. They suggest that many of the raw food diet’s benefits are in fact a result of excesses in the diet; for example, a shiny coat can be attributed to the high fat levels found in such a nutrition plan. It is noted that there are high-fat commercial foods available that would produce the same shiny coat but without the risk of an unbalanced diet or bacterial health threats.

Those in support of the raw food diet counter the concerns about bacteria like salmonella by suggesting that commercial food can just as easily contain harmful bacteria. They feel that as long as an owner is careful about washing their hands thoroughly when preparing a raw diet meal for their dog, then there is no more a threat from bacteria than when cooking meat for human consumption; you just have to be clean to avoid cross contamination.

However, even some vets that support the BARF diet feel that is only suitable for certain dogs, for example, some feel that if you feed a puppy on a raw food diet and don’t get the calcium levels right, then it can cause growth issues.

This topic is one that has created some great discussion within our office and we’d love to know what kind of diet you use for your animals and more importantly, why? Do you have your dog on a raw food diet and if so, is it prepared fresh or do you have the ready-made frozen packs that manufactures offer? Let us know you experiences, thoughts and opinions in the comments box below.

For more about how to care for your pet, visit our blog, article and guide pages. Insuring your pet gives you peace of mind that if anything were to happen, you and your pet will be covered. Animal Friends offer a range of policies for dogs, cats and horses, and we also insure older pets.