These are touch (tactile), smell (olfactory), hearing (auditory), taste (gustatory) and sight (vision). The horse is by nature a prey animal, which requires it to be acutely perceptive and aware of its environment at all times in order to avoid falling victim to one of its predators.

The horse’s five senses, and their efficacy, have played a key role in the successful evolution and survival of the species. Due to the acuteness of the horse’s sensory capabilities, often when we deem a horse to be misbehaving by spooking or acting oddly, it is because they are actually aware of an additional factor in the environment that we cannot even perceive.

The differences in the horse’s five senses can be fully explained by understanding the sensory structures which create them.

We will look at these two senses together as they are linked neurologically in the horse.

The horse uses its sense of smell to investigate objects, be this a new bucket, a newly painted fence, a new friend in the field, or identifying an old friend in a group of horses.

For a horse to use its sense of smell to its maximum capabilities, the nasal structure of the horse is of important consideration.

When a horse is smelling a new object or environment, it will blow air harshly out of its nostrils before taking a long, deep breath in. The sharp exhale allows the horse to clear the nasal cavity of any lingering smells which might confuse the new air sample.

The long inhale allows the horse to take in and process as many of the new odour particles in the air as possible. It is these odour particles that translate into scents. They bind to cells, which are known as olfactory receptor cells, and the information gathered is then relayed to the brain where the information is processed.

As the horse has a nostril on each side of its head, it is capable of smelling two things at once. The longer the horse’s head, the longer the nasal cavity, therefore the more information the horse is able to process.

How often have you seen a horse, when smelling an unusual or new object, throw its head in the air and stick up its top lip? Well, this is actually called the Flehmen response. The horse is drawing as much of the new smell as possible into its nasal cavity so that it can make an accurate interpretation of the new object.

The horse uses its sense of smell for a variety of reasons, identifying friend from foe, communication, marking territories, locating and recognising food, and detecting reproductive states of stallions and mares.

So what is the horse’s sense of taste? Taste is the interaction of chemical stimuli with chemoreceptors which are found on the horse’s tongue, just like in humans. The horse uses its sense of taste in conjunction with its sense of smell to accurately differentiate between individuals, feed stuffs, territories etc.

Horses have been shown in research to be selective in their feed stuffs; when a horse comes across food that has previously made them poorly they will choose to avoid it in future.

Horses will also use their sense of taste to be selective in the nutrient balance of their diet. For example, a horse who is deficient in salt will seek out salty feed stuffs where possible.

Both taste and smell follow similar sensory pathways when being interpreted by the horse. When the horse smells or tastes a new object or individual, the specific receptor cells in the nose, mouth and throat transmit this information directly to the brain for interpretation.

The cells (known as olfactory sensory neurones) are stimulated by smells, and transmit the information from the smell receptor cells to the brain.

Gustatory sensory neurones react to the food or drink entering the mouth, activate the receptor cells on the tongue, and transfer the information to the brain.

As a prey animal, the horse has good visual capabilities. The horse’s eyes are placed on the sides of their faces which gives them wide peripheral and long distance vision in order to watch out for oncoming predators.

In addition, the horse’s eye is amongst the largest of any land mammal, allowing the horse to have nearly 350 degrees of vision.

However, as the horse’s eyes are situated on the sides of the head, it does mean that they have a blind spot which extends about 2 metres directly in front of the horse. In order to see in this space, the horse has to turn its head and use one eye only to view this area.

The horse utilises two different types of vision to review its environment: ‘Monocular’ and ‘Binocular’ vision.

When a horse is stood with its head held high and is looking across a wide landscape it uses monocular vision, using each eye separately to view the complete landscape.

It is this vision that the use of blinkers disrupts, stopping the horse from being aware of its full surroundings.

A horse would most commonly use binocular vision when navigating across uneven terrain and working out the safest foot placement; and for locating the best areas of grazing.

However, as we have already mentioned, the presence of the blind spot directly in front of the horse means that it must regularly lift its nose in order to see.

This blind spot is important to remember when we are jumping our horses; if a horse is allowed to approach a jump with its head up it can see the jump as it approaches, however if ridden in an outline, they are not able to see it until the last second.

An important factor to consider with horses is a term called ‘stereopsis’. Stereopsis is the ability to visualise and perceive depth.

Originally, it was thought that animals whose eyes are placed on the sides of their heads were not capable of this as, in order to perceive depth, there has to be a large binocular vision overlap between the two eyes.

The horse is thought to have a better perception of depth than cats, but the research into this area of equine science is still ongoing.

As the horse spends most of its time with its head near to the ground in the natural environment, it relies mainly on its monocular vision, therefore it would rarely use its stereopsis capabilities in the wild.

Anatomy of a horses eye

The anatomy of the equine eye is important to consider in order to understand how the horse sees:

The cornea is the transparent outer layer on the eyeball and is the first refractive surface that the light passes through.

The iris is the coloured part of the eye, and it can increase or decrease its diameter in order to control the amount of light entering the eye through the pupil, which is the black area in the middle of the iris.

The lens (which sits behind the iris and pupil) then focuses this light onto the retina.

Contrary to common belief, horses can see in colour. They possess a type of vision known as ‘Dichromatic vision’. In dichromatic vision, only the three primary colours are perceived. Research has been carried out to determine whether horses are able to tell one colour from another. One particular study by Macuda and Timney in 1999 showed that horses are able to tell red and blue from grey, but not yellow or green. 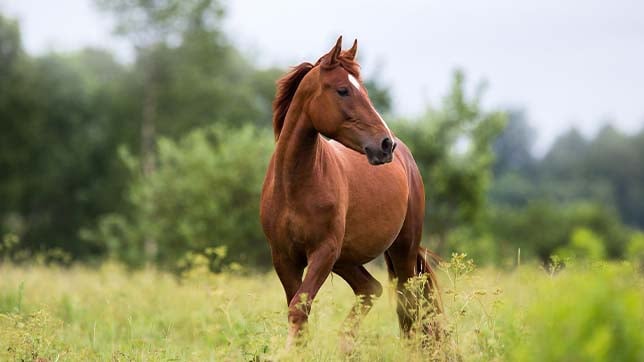 A horse’s hearing is much keener than ours. They use their hearing for three primary functions: to detect sounds, to determine the location of the sound, and to provide sensory information that allows the horse to recognise the identity of these sounds.

Each ear is funnel-shaped, and called a pinna. The pinnae are controlled by 16 muscles each, and they can move in unison or independently. The equine ear can move around a lateral arc of 180 degrees, and can respond to sounds from up to 4400m away.

But what is sound? Sound is a type of energy made by vibrations. When any object vibrates, it causes movement in the air particles. These particles bump into the particles close to them, which makes them vibrate too causing them to bump into more air particles.

This movement, called sound waves, keeps going until they run out of energy. If your ear is within range of the vibrations, you hear the sound.

The equine ear is multifunctional and its structure reflects this. The ear is constructed of three chambers. The three sections of the equine ear are the external, middle and inner ear.

The external ear is made up of the pinna (ear flap) and annular cartilage which forms the funnel shape. The funnel shape concentrates incoming sound waves onto the eardrum inside the ear.

The middle ear is the air-filled chamber behind the ear drum and contains the malleus, incus and stapes bones which amplify the vibration on the eardrum towards the inner ear.

The pressure within the middle ear must be the same as the outside pressure so that the sound waves can be accurately transferred; this pressure is maintained by the Eustachian tube which attaches the middle ear to the back of the pharynx.

Within the inner ear is the cochlea where auditory sensitive cells are located along with the vestibular apparatus which plays a role in balance. The auditory-sensitive cells convert the sound waves into electrical impulses which are then transmitted to the brain for interpretation.

The horse interprets sound waves according to their amplitude and frequency, but not all sound is interpreted as noise by the horse, some low frequency noises are picked up as vibrations through the muzzle and hooves as these two structures contain fast-adapting mechanoreceptors.

However, existing research is inconclusive into what the horse actually hears. It is difficult to create accurate methodologies to assess the behaviour of the horse in such a way that correctly describes underlying perceptions and sensations. Measuring the effects of amplitude and sound waves on the equine ear is, therefore, a limited field.

The horse uses its sense of touch in the wild to form bonds with its fellow herd mates and relax. The horse’s sense of touch is highly acute, and they are able to feel far more than humans. So if you are having to kick your horse, he can feel you, he is just ignoring you!

There are a number of different receptor cells in the horse’s skin which are used to create the sense of touch. Temperature is detected by cells known as thermoreceptors, pain by cells called nociceptors, and pressure by cells known as mechanoreceptors.

When horses groom each other, they are using their mutual sense of touch to calm and relax each other, and create bonds between individual horses.

Research has shown that horses have a lower heart rate and a higher occurrence of positive behaviours when they are carrying out mutual grooming.

A very important part of the horse’s anatomy with regards to its sense of touch, is the long hairs around the eyes and muzzle. These are known as Vibrissae and are a key component of how the horse understands its environment.

They have a rich nerve supply and the horse uses them to judge distances between objects, and they are involved in the location of vibration and sound.

Therefore, we can clearly see that the horse’s senses are far more complex than meets the eye. The way we act when around our horses will strongly influence how they perceive us, so always consider this when getting ready to see your horse today!

Support and advice so that owners and riders can take the very best care of their equine.

Horse insurance can help cover the cost of veterinary treatment if your horse gets injured or falls ill.

Learn about our horse insurance policies