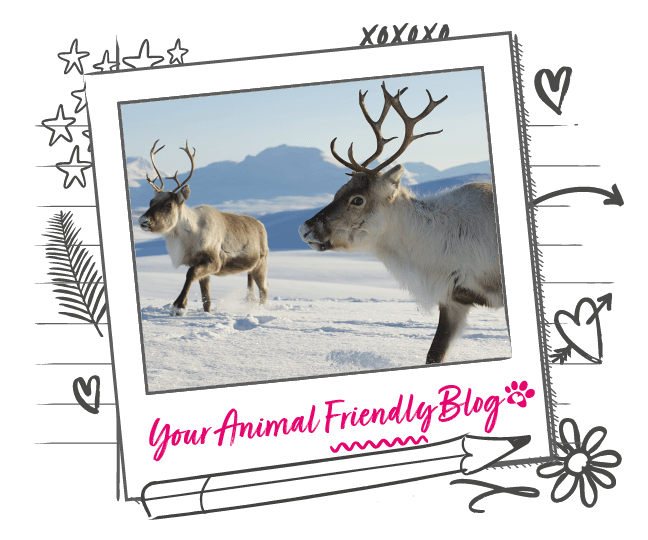 Christmas is nearly here, so we're taking a look at some interesting information about reindeer.

Reindeer have to traverse vast amounts of harsh terrain as they migrate and this includes crossing wide rushing rivers and even the frozen ice water of the Arctic Ocean.   Reindeers swim easily and quickly, moving at between 6.5 km/h (4.0 mph) to about 10 km/h (6.2 mph).

Their footpads adapt according to the seasons.

In winter their footpads contract and tighten, becoming a bit like an ice-pick which they use to cut through surface ice and snow in order to dig through to food below.  In summer, when the ground is soft and wet, their footpads expand again, giving the reindeer better traction.

The reverse side of a Canadian quarter features the bust of a reindeer.

Or actually, a ‘Caribou’ as they are known in North America.  In fact, reindeer are said to be the smaller cousin of the Caribou and were domesticated in northern Eurasia around 2000 years ago.

This is down to the fact that they survive in brutal environments.  Reindeer have gained high status as an animal of nobility in some cultures, such as that of the Sami people who are indigenous to arctic areas.

Reindeer first became associated with Christmas through the poem ‘A visit from St. Nicholas’, which was written in 1823 by an American called Clement Clarke Moore.  The poem is largely responsible for the some of the conceptions we have today of Santa Claus and his reindeer.  The use of reindeer to pull Santa’s sleigh evokes the use of reindeer as traditional draft animals.

Do you know all their names?

The original team of reindeer which pulled Santa’s sleigh were: Dasher, Dancer, Prancer, Vixen, Comet, Cupid, Donner, and Blitzen, according to the poem.  The German variation for Donner is ‘Donder’ and in Dutch, the names are ‘Dunder and Blixem’.  The story of Rudolph was a separate story written by Robert L. May in 1939 as a children’s story.  Due to its popularity, boosted by the song ‘Rudolph the red-nosed reindeer’, Rudolph was later accepted as being a part of Santa’s team.

Katherine Jenkins posed last December with a rescued reindeer for a festive shoot.  The reindeer, called Thor, has also been seen alongside Hugh Jackman on the film set of Les Miserables.

This is useful for their survival as it helps their sleep-wake cycle and metabolism cope with the long ‘polar-days’ and ‘polar-nights’ of the regions in which they live.

The average life-span of a reindeer is 15 years.  They eat lichen, moss and mushrooms during winter, and mostly grasses and plants in the summer.

Know your bulls from your cows!