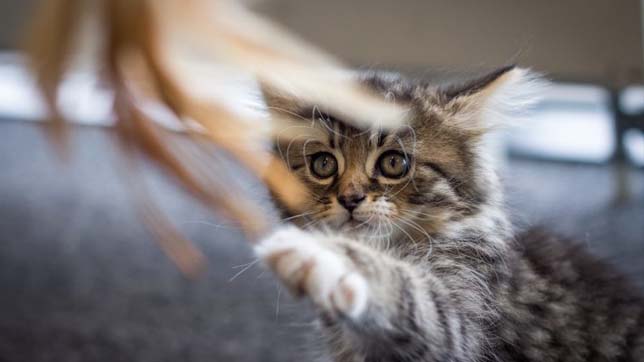 Feline Leukaemia (FeLV) is a virus that that causes an increase of leukocytes (a type of cell found in the blood stream) and suppresses the immune system.

FeLV enters the body, multiplies and then travels through the bloodstream to the bone marrow and intestines. The lack of an immune system and in turn, a natural bodily defence, means an infected cat will be susceptible to diseases.

How it is transmitted?

Those at highest risk

Kittens are at the highest risk of catching FeLV. This is because their immune systems aren’t yet fully developed and so often aren’t strong enough to battle the disease if caught. Also, if a mother is infected then the disease can be passed on to her kittens either when they are in her womb or when they are suckling from her.

Once a cat has been infected, symptoms may not appear for some time. Indeed, it can be up to three years before there any signs that a cat may have this disease.

The virus can affect any number of an amount of organs within an infected cat’s body and so initial symptoms can often be vague and not necessarily signify that a cat is suffering from the disease.

An early, but by no means specific, sign can be if a cat takes a lot longer than it should do to recover from a mild illness. A fever, chronic and on-going diarrhoea, a loss of appetite and as a result drastic weight loss, can also indicate that a cat may have the virus.

In addition, a cat’s appearance will deteriorate with its gums turning pale, its coat becoming unkempt and its lymph nodes (a small oval-shaped organ belonging to the immune system) under the jaw enlarging.

To determine whether or not a cat is suffering from FeLV, a vet will usually perform what is called an ELISA test. A high proportion of the virus is made up of a particular protein and this test detects that protein.

Unfortunately, once a cat has contracted the virus there is no cure or treatment. It is therefore advisable to try and prevent an uninfected cat from catching the virus with vaccinations throughout its life. However, it is important to note that the vaccination will not work 100% for every cat.

Please be aware that this guide is for informative and advice purposes only. It is not a medical document and if you are worried that your cat may be suffering from Leukaemia or any other type of illness then you should contact your local vet immediately.