When thinking of health problems that a cat might have to endure through its lifetime suffering from a seizure may not rank very highly in the list that you populate. Nevertheless, when seizures do occur, they can be very upsetting for an owner to watch; especially if the cat in question is suffering from a severe seizure.

A seizure occurs when neurons in the brain misfire causing them to become over-enlivened and transmit haphazard uncoordinated signals. Neurons usually function in a much more organised way, transmitting impulses in an orderly and synchronised manner. This unusual functioning of neurons is what causes a cat to have a seizure.

There are a various amount of signs that come with a cat having a seizure. These can be; collapsing, foaming at the mouth, twitching of the legs, severe muscle spasms of the whole body, loss of consciousness and involuntary urinating or defecating.

It is essential to note that not all seizures affect a cat with this temporary disablement and that some can react with what is called a ‘psychomotor’ seizure. This is when a cat’s seizure makes it display drastic behaviour such as a sudden bout of mania or madness. When in this state a cat may scratch, bite, chew or lick another cat/human (or itself) in a frenzied way.

There are a few conditions that produce symptoms that look like a seizure but are in fact not an actual seizure. An example of this is vestibular disease. This occurs when there is a problem with the balance centre of a cat’s inner ear making the cat in question constantly wobbly and disorientated. Thus, the cat is always falling over, rolling around on the floor and jerking its head. Vestibular disease is quite easy to put right and so is often not as bad as the symptoms may make it look.

Most feline seizures are due to the cat ingesting some kind of poison. Strychnine, insecticides, lead, anti-freeze and some rat poisons can all, if ingested, cause a cat to react with a short intense seizure in which the cat will convulse violently for around about a minute and turn blue as it is unable to breathe. If a cat has sustained a head injury then it may have a seizure some weeks later; this is because the scar tissue on the brain can affect neurological functions. In addition, if a cat suffers a stroke, then there is a chance it will have a seizure as a stroke can cause damage to the brain. Aside from damage to the brain, metabolic disorders such as liver and kidney failure can lead to a build-up of toxins in the body and also produce seizures.

There are a few things you must make sure that you do if you find your cat is having a seizure. Firstly, ensure that he or she is not in danger of falling from a height and sustaining an injury. Be sure to move anything that he or she can hurt themselves on, such as nearby furniture. Make sure that he or she is covered with a light blanket and then stand back and wait until the convulsions subside. Do not try to put your fingers in to your cat’s mouth. They do not swallow or bite off their tongues and so you’ll only risk getting bitten for no reason. Try to take a note of what movements your cat is specifically making and with which parts of its body (this will help the vet to determine the exact problem). 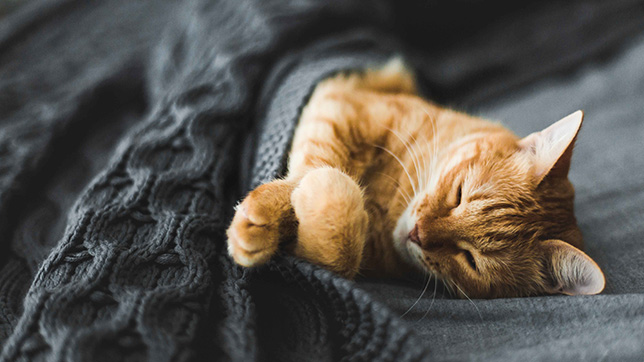 Once the fit has diminished, take your cat to the vet as soon as possible. Here the vet will perform a neurological exam, check blood chemistries and if possible conduct a CT or MRI scan to ascertain the exact severity of the problem. Your vet may then prescribe anticonvulsant tablets for a few weeks. If your cat then has a seizure again after its treatment then he or she may be put on anticonvulsants for a lengthy period of time, if not permanently. This is usually the case if your cat has epilepsy.

If your cat has had some kind of fit and you haven’t had them checked at the vet, then we strongly advise you do so soon. Even if it was a while ago and it hasn’t happened since, it is still worth a check-up. Please be aware that this guide is for advice only and if you have concerns or worries about your cat then please speak to your veterinarian.