A cat’s body language is often quite subtle, so it can sometimes be difficult for an owner to understand how their pet is feeling and what they are trying to tell them. However, each individual cat is different, so there is no guarantee that the behaviour and body language of one cat will mean exactly the same thing as it does with another. Here is our guide to some of the most common forms of cat behaviour. 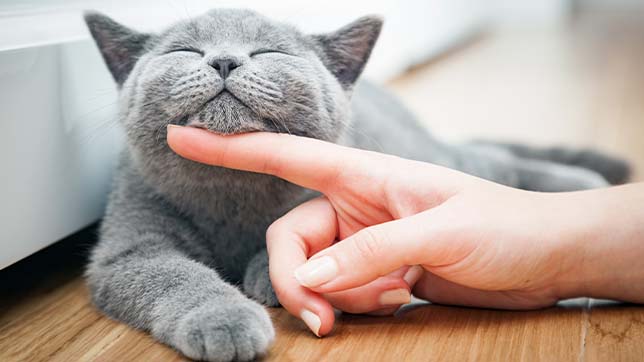 This is a way for cats to greet each other, and is similar to a human handshake. Cats use their powerful sense of smell when employing the nose rub to ascertain whether another cat is part of their ‘group’, and it is also a method of marking their territory. This friendly, trusting behaviour is one way they share the scents they collect with other cats.

Otherwise known as bunting, head butting is what kittens do to their mothers when searching for somewhere to nurse. In adulthood, cats do it to rub facial pheromones on to people, other cats or objects, and it is regarded as a stronger indication of trust than touching noses.

The natural reaction of someone who loves cats is to call them, spread their arms out and approach them. Ironically, cats can often view this as threatening behaviour. The person who doesn’t like them will refrain from drawing attention to themselves, which unwittingly makes them more attractive to the cat because their behaviour is perceived as less threatening.

Lying on their back, exposing their belly

By being so far removed from a predatory stance, the cat is putting themselves in a vulnerable state by adopting this particular position. It demonstrates that they know you are not going to hurt them, and is a sign of happiness and relaxation. Nevertheless, be careful how you respond to this type of behaviour, as some cats may perceive your approach as threatening.

This defensive form of behaviour is a prelude to fighting, and could also indicate that the cat is frightened. The animal might be trying to demonstrate that they are the alpha cat.  Unneutered males can hiss loudly before a fight.

Usually signalling excitement or frustration, cats chatter their teeth when they see prey through a window that they can’t access, such as a bird or squirrel. The jaw movement and chattering noise is similar to that of big cats when they administer their killing bite to catch a bird or mouse quickly. It can sound like a shivering human.

Although this behaviour may seem unusual, eating grass aids cats in clearing the digestive tract of fur and bones from prey. The folic acid present in the grass is a vital vitamin for cat bodily function and helps with haemoglobin production. Some believe it can also relieve cats of sore throats.

Purring is traditionally seen as a display of contentment, and is a way for a kitten to bond with their mother. When a cat purrs whilst in a vulnerable position, such as on their back and exposing their belly, it is the equivalent of a smile. They can also do it when hungry, nervous, and at various other times.

Usually territorial behaviour, this is a way of cats letting others know they have staked their claim over something. Both horizontal marking and vertical spraying can be seen more commonly in cats that haven’t been spayed or neutered. It is instinctual.

This is territorial behaviour as well, but there are also other reasons why cats scratch. They have pads under their paws that leave a scent on areas they have scratched, plus it conditions their claws. Buy a cat scratching post to stop them from using your furniture.

A cat can hide for various reasons. They may be anxious, scared, stressed or in pain. If they are hiding a lot, take them to the vet to rule out any medical problems.

A kitten will meow at their mother when they want something, and the behaviour will usually be repeated when attempting to gain their owner’s attention. Cats don’t usually meow at each other, as they tend to stop when they get older.