Why isn’t my cat using its litter box?

Whether you let your cat roam free or keep them as a housecat, you will probably have trained them to use a litter box. It’s the most convenient form of litter training for cats as, unlike dogs, they can be tricky to convince to only use the outdoors as their toileting area.

Sometimes, however, you may find that your otherwise perfectly-housetrained cat will stop using their litter box consistently, or in some cases will cease using it altogether.

While this can be extremely frustrating, it’s important to recognise this problem quickly and try and ascertain the cause. By finding out what is at the root of the problem you can be more specific when you try to resolve the issue. 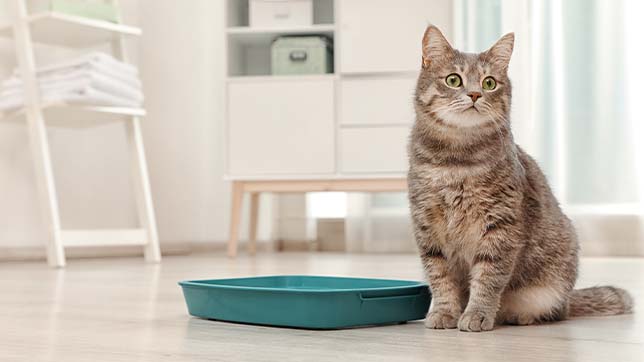 It’s possible that there is an easily-resolved physical issue which is preventing your cat from eliminating appropriately.

The litter box itself

There is a chance that the litter box is the problem. If you have recently changed something about it, such as its location, the type of litter you use, how deep the litter is or what you use to clean it, you could have unwittingly created an issue.

Changing the location of the litter box may have rendered it inaccessible, whereas changing the type or depth of the litter could make it unpleasant for your cat to stand in and use. Some felines will have a preference for a particular texture of litter, so it’s usually best to stick with what they know once you’ve chosen it.

If you’re set on changing their litter for any reason it might be advisable to do so gradually, mixing the types together until you have completely changed to the new kind. This will give your cat an opportunity to get used to the change without being too abrupt. The ideal depth of litter is somewhere between 1 and 2 inches. You could always draw a line around the inside of the tray as a guideline.

Using a new scent of disinfectant can cause your cat to turn their nose up at their litterboxes. Cats rely on their sense of smell to remember things, so a change of fragrance could leave them feeling suspicious about the litterbox. It’s best to use an unscented ammonia-free disinfectant.

If your cat is getting older they might have problems getting into a litterbox kept in a high place or with extra-high sides. Make sure that the litterbox is in a practical location and is easy for your cat to use. You should also make sure it is large enough. As they grow they may need a bigger one and decline to use one that is too small.

Sometimes the problem isn’t that the cat dislikes the litterbox, they may simply prefer something else, whether that’s an alternate location or a different surface texture. If they keep eliminating in a certain spot in the house you could always place the litterbox there. If that’s impractical for any reason you can spray the area with a citrusy or pine-scented non-ammonia cleaner. These pungent smells should put your cat off the area.

If your cat has taken to using specific surface textures such as carpet, grass or gravel you can attempt to mimic this in your choice of litter to appease your cat’s preference.

You must do what you can to make the litterbox accessible, clean, comfortable and appealing, while also making inappropriate areas less alluring. You can do this by putting tin foil on the surface in question or making sure the area is brightly lit to act as a deterrent.

Sometimes a cat can be suffering from a psychological or emotional issue which prevents them from using their litter box.

A cat may sometimes decide not to use the litter box because they experience something unpleasant while using it. For example, if a cat has a kidney or bladder infection they may associate the pain of urinating with using the litter box and attempt to avoid this discomfort by going elsewhere.

You may notice that your cat is hesitant to approach or use the litter box, or that they enter and exit it very quickly. This is one instance where changing something about the litter box might actually work in your favour. By altering the scent, texture or location of the box, you could provide a litter box that your cat won’t associate with their prior experience.

Cats are territorial animals and any disruption in a space they perceive as “theirs” could cause them to act strangely. This could come in the form of territorial aggression, which includes urine marking.

Urine marking is a deliberate act of spraying something (usually a vertical surface) with urine as a way of staking out their turf or claiming something as “theirs”. This can be dissuaded with the use of a pheromone diffuser like Feliway and/or removal or rectification of the source of the cat’s stress.

Stress can be caused by a number of factors, whether it’s a sudden change of routine, a new pet, moving home or even a new item of furniture. In general it is best to make any changes gradually so as to avoid causing your cat unnecessary confusion.

If you have more than one cat there could be a dispute going on between them. This sometimes results on one cat being physically prevented from using the litter box, or too scared to approach it if it lies in a rival cat’s territory. If your cats aren’t on good terms with one another this must be addressed, but in the meantime it helps to have more than one litter box in a couple of different places. If possible, it’s usually best to have at least one litter box per cat.

Sometimes a behaviourist will be able to help with psychological or emotional problems. Talking to a professional will give you a more rounded view of the issue, and having a second pair of eyes might help you discover things you hadn’t realised. Generally cats prefer consistency, so from an early age it’s best to choose a routine and then stick to it.

While it may seem on the surface to be a behavioural issue, there could be an underlying medical reason why your cat is toileting inappropriately.

FIC is a neurological disorder that results in an inflamed bladder. You cat will attempt to urinate at regular intervals and will seem to strain. There is a chance you’ll find blood in their urine. If they do urinate outside of the litter box it will be because they simply couldn’t contain themselves any more, and they may show signs of being in pain when they do.

If your cat is only releasing very small amounts of urine at any time then they might have a UTI. This can sometimes occur spontaneously or as a result of complications from surgery. While UTIs are not usually serious they do require prompt medical attention, as your cat will be in a great deal of discomfort.

Kidney stones are caused by a build-up of minerals in the kidneys. They can be extremely painful and in some cases will actually cause a blockage in the urinary tract.

If your cat appears to be in any pain while urinating or defecating, if you find blood in their litterbox or anywhere else they have eliminated, seek veterinary attention immediately. FIC in particular can prove fatal.

In fact, if your cat suddenly starts to eliminate inappropriately it’s best to take them for a check-up, even if you suspect it’s a behavioural issue. Ruling out medical issues first would be the safest way to proceed.