Males and females up to 15lbs 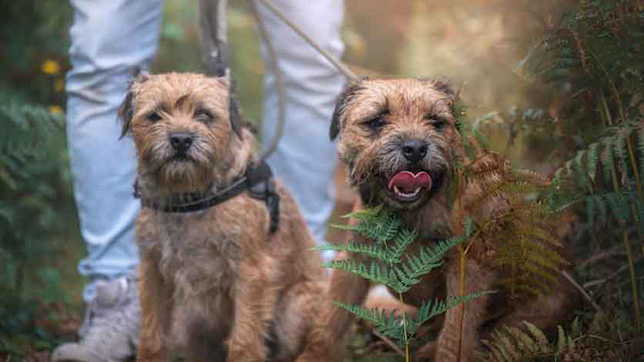 Border Terriers have had many different names in the past including Redesdale Terrier and Coquetdale Terrier, depending on where they were bred. Then, in the 1880s, they were known as the Border Terrier either for their associations with the Border Hunt of Northumberland or because of the Scottish-English border where they originated from.

They were bred to be able to have a dog that was small enough to fit into a fox’s burrow but one which had legs long enough to be able to run with the huntsmen on horseback.

In the 1920s, the Border Terrier was recognised by the Kennel Club and are found across the UK, and in other parts of the world.

Border Terriers are easy to recognise amongst other terriers because they have a head like that of an otter. They have a broad skull and a short muzzle with a strong jawline. Their ears are almost always folded over, in line with their eyebrows which makes them look like they’re always thinking hard about something.

They have a short, wiry coat which has a dense top but is softer underneath nearer their thick skin. Their coats can be:

These terriers are known for being good-tempered, affectionate and trainable pets who love to explore the great outdoors. They’re an adaptable breed can that can live in almost any environment and are happy in a variety of situations if they get enough exercise and spend some quality time with the family.

They can be a little stubborn at times, so patience and perseverance are key to training a Border as they might decide to ignore commands and go off and do their own thing. Positive reinforcement, like using their favourite treats, will help keep them engaged in their training.

Just like with all breeds, it’s important to socialise a Border Terrier from a young age so to give them the best start in life and to help them grow to be confident and outgoing dogs.

Border Terriers often have a very high prey drive so it’s important to ensure they have a very reliable recall and a secure garden. They can be raised alongside cats, but you might find that unfamiliar cats and other wildlife will get chased.

Always be on the lookout for small animals while out on walks, so that you can spot them before your dog does to try and avoid a chase and a potentially missing dog.

Just like with other breeds, a Border Terrier is likely to vocalise its feelings or bark to get your attention. This will vary depending on the dog, but it’s important to keep them entertained as boredom can lead to destructive behaviour and barking.

Is a border terrier good for me?

Properly socialised, Border Terriers can be affectionate and loyal pets, but they do require a present owner to provide enough exercise and attention. If you’re looking for a pet that can keep themselves entertained, then the Border Terrier might not be the dog for you as they want to be a part of the family just like everyone else.

They’re known to be determined diggers, so a secure garden is important to prevent an escaping dog. They need lots of exercise but otherwise are not a high maintenance breed whose coat is easy to care for.

Border Terriers have appeared as fictional characters in a variety of different films and series’, including Anchorman: The Legend of Ron Burgundy, Wonder, 102 Dalmatians and Return to Oz.