Up to 9 inches at the shoulder 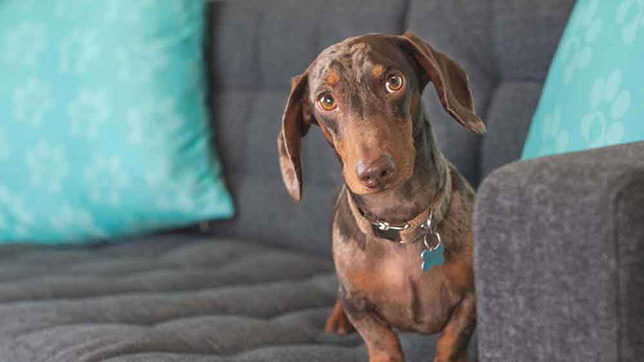 The Dachshund, literally translating to ‘badger dog’ and affectionately known as the Sausage Dog, is a German dog breed developed over 300 years ago. The standard-sized Dachshunds were bred for the purpose of hunting badgers, owed to their long bodies and short legs which allowed them to burrow and dig into tunnels.

In the UK and US, Dachshunds come in two sizes – standard and miniature – however, a third smaller size – kaninchen (‘rabbit’ in German) – is recognised elsewhere by the World Canine Federation. The breed is commonly pronounced as ‘dash-hund’, but the correct pronunciation is actually ‘dacks-hund’.

Dachshunds may have a smooth and shiny coat, a wired coarse coat or a longhaired coat, and their grooming needs will vary depending on which coat they have. Colours can range from red, black, to chocolate or tan, or a mix of two or more of these. Dachshund breeds have a long snout and an elongated, muscular build with short legs, hence the name Sausage Dog!

Dachshunds are loyal, intelligent, courageous, and dominant. They are pack dogs and while they love human and doggy companionship, they would generally prefer to live with other dachshunds or other small dogs which have similar temperaments. They tend to bark a lot, and don’t be fooled by their small stature – their bark can be very loud!

You shouldn’t leave your Dachshund alone for more than 4 hours at a time. They should get at least one 45-60 minute walk every day or split into two 30 minute playtimes, and you should be careful allowing them to run if they have known back problems or other health conditions.

Because of their long backs, it is important that Dachshunds do not become overweight as this could lead to spinal and disk problems, hip dysplasia or patella luxation. Dachshunds are also susceptible to ear infections due to their floppy, folded ears so it is important to regularly check and clean their ears.

As Dachshunds are also a loyal breed, they have a tendency to attach to one person which may lead to problems with separation anxiety.

Is a dachshund the breed for me?

Dachshunds cannot be left alone for long periods, so if you are out of the house all day you may wish to consider another breed. However, if your heart is set on this lovely little breed, it is advisable to hire a dog sitter or take them to doggy daycare. Dachshunds are great with children and would need to live with an active family who enjoys the outdoors.

They love cuddling, are relatively odourless and do not require bathing as often as some other larger, thicker-coated breeds. They are mild-to-moderate shedders, so if you don’t mind a bit of fur here and there, this could be the perfect breed for you!

The Dachshund’s popularity declined dramatically during the two World Wars because depictions of the Dachshund were used in Anti-German propaganda. However, today, they remain a highly popular and desired breed.