What happens to stray dogs?

For whatever reason, dogs will sometimes find themselves wandering away from their usual territory. But what happens to a stray dog once they leave home?

Why do dogs stray?

Often, where a dog ends up will depend on why they have strayed in the first place. Male dogs will travel very long distances if they can smell a female in heat, in which case he will follow his nose to find her. He is most likely to be found near the female dog he has been pursuing. Similarly female dogs who are in heat will often stray in order to find a mate.

Some dogs will wander off because they are under-stimulated within their home environment and they might try and make their way to a familiar walking spot, or get distracted tracking new smells. Sometimes they stray because they spot something they want to chase or investigate, meaning that they chase their prey until they either catch it or it escapes entirely. And, sadly, some dogs run away to escape neglectful or abusive home environments. Regardless, dogs can end up a very long way away from home.

What do they do?

Dogs are not particularly well-equipped to fend for themselves in the wild. While they are descended from wolves, the process of domestication over hundreds of years has bred out a lot of their hunting drive and aggression. This will make it difficult for them to hunt for food. They will usually have to rely on roadkill and other carrion, as well as discarded human food, in order to survive. This could lead to stomach upsets or even poisoning.

They will be accustomed to humans providing food, water and shelter and may struggle to find these things on their own. While some wolfish instincts remain in domestic dogs, they will not necessarily naturally adapt to the wild.

In some tragic cases the dog might be injured or even killed. Road traffic accidents, predators, falls or getting stuck or stranded could have terrible consequences.

How do they make their way home?

In some cases a stray dog will find their own way back, but that is unusual. Generally a dog will need a little help returning, especially if they’ve travelled a great distance. Hopefully the dog will encounter some people who are willing to help. Members of the public are actually legally obliged to alert the dog warden if they see a stray dog.

Depending on the temperament of the dog they may be happy to interact with humans they meet. However, the experience of being lost and the disorientation of being far from home may mean that a usually-friendly dog reacts negatively when approached. In the best-case scenario the dog will be safely contained and taken to the pound.

What happens at the pound?

The dog warden will keep a dog for seven days, in the hopes that the owner will come forward. They will scan for a microchip, or use the ID tag to attempt to make contact with the owners. If they are successfully found, and wish to retrieve their dog, they can do so on condition that they pay the kennelling fee and any veterinary fees incurred during the dog’s stay. The total fee will vary depending on the area and how long the dog is with the warden for.

If the dog’s owners cannot be contacted, or they don’t want their dog back, the dog can be adopted directly from the dog warden, either by the people who found them or someone looking for a rescue dog. If a home isn’t found for them within seven days the dog warden will try to find them a space at a local shelter. If this is impossible and the dog isn’t adopted from the warden then, sadly, the dog may be euthanised. 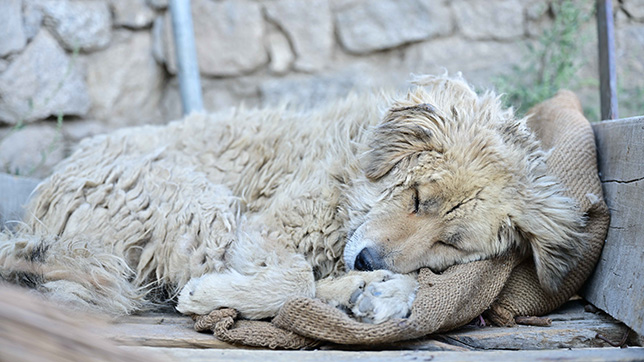 What happens at the shelter?

In the UK some shelters will keep a dog as long as it takes to find them the right home, which is why they are so worth supporting. The dog will be assessed for temperament and their level of training, as well as being given a health check.

If needs be the shelter will address any medical or behavioural issues. Once the dog is ready they will be made available for rehoming.

If you are interested in rehoming why not have a look at Love Rehoming? They have plenty of inspirational rehoming stories and handy guides to the rehoming process.