A guide to different cat coats

Domestic cats’ coats come in a range of beautiful colours and patterns – making each cat wonderfully unique. How the coats look is all down to genetic mutations through careful breeding programs and introductions of new breeds from around the world.

Here is a simple guide to the different patterns and colours you could expect to find in a typical cat coat:

There are six varieties of patterns, which are combinations of colours: Tabby, Solid, Tortoise, Colourpoint, Tricolour and Bicolour.

Tabbies are the most common and popular cat coats in the UK. These cats can be easily picked out as they often have striped markings or spots on the chest. Striped Tabbies are also known as ‘tiger’ cats.

They often have ‘white accessories’ to go with their coats, usually the bib (chest), feet or tail. You can also identify a Tabby because they have an M on their forehead and pencil lines on their face.

The most common colours are brown, grey and orange but there are also variations of Tabby cat including spotted, mackerel, classical, patched and ticked.

These cats often have two distinct colours: a mixture of black and orange and they often have brown or gold specks added. Diluted tortoiseshells can be blue or cream. The patterns are distinctive and sometimes there are striking extra patches of colour.

Cats with this type of coat are generally female. Males with this coat-type are rare and usually sterile.

You can also get a ‘Torbie’ which is a combination of Tabby and Tortoiseshell.

Colourpoint cats have much darker colours on their feet, face or tail and their colour tends to be beige fawn or light brown. Siamese cats tend to have this type of coat pattern.

These cats tend to go darker with age as their bodily temperature drops.

These cats have solid patches of colour – white and one other colour. There can be many variations of a Bicolour cat.

This pattern type is most common among mixed breed cats.

This coat pattern consists of black, red (ginger) and white. They can also come in diluted shades of cream and blue.

Due to genetic factors, tricolours are much more common in females.

A cat with a solid coat has no markings or patterns. If any single flash of colour can be seen on a solid cat, it is not considered ‘solid’.

The most common colours for a solid cat are grey, black or white. It would be rare to get a solid chocolate or caramel-coloured cat.

Solids are also known as ‘Self-coloured’ or ‘Selfs’.

Now you have seen the patterns that are available on cats, it’s time to look at the colours.

Generally, the colours, which can be termed differently depending on the breed, are: white, red, blue, black, cream, cinnamon, fawn and brown.

The colour of a cat depends completely on genetics.

The two primary colours in cats are black and red. Every other shade is a variation of those colours, except for white. Any white that appears is known as spotting and is caused by a masking gene.

A kitten will inherit its colourings from both parents. However, some colours such as those with the red gene, are sex-linked. This means that they appear on some chromosomes which are not present in males. 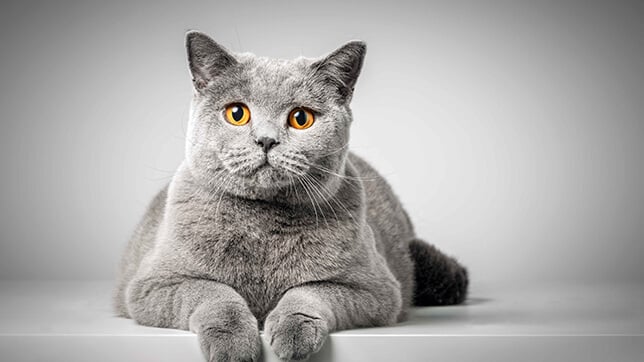 Along with those multitude of colours, there are also some different shades: