Males and females up to 13.2lbs 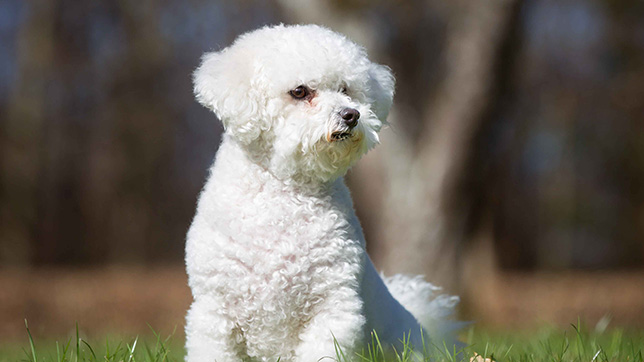 The Bichon Frise – meaning curly lap dog in French– was originally brought over to France by sailors from the Canary Islands in the 13th century. On the boats, the Bichon Frise was considered a companion and was often spoilt. In fact, it was spoilt so much that it became known as “Bichonner” which means dandy.

Painter Boucher often portrayed the breed in his paintings and in the 20th century, the Bichon Frise became very well-known in France and often took part in circus shows.

In 1933, the breed was officially adopted by the national kennel club for France. It is thought this was because of The Adventures of TinTin, which featured a small, white fluffy dog.

Often mistaken for a miniature poodle, these dogs have slightly rounded skulls, with dark round eyes and a black nose. Their dense coats are curly and white but puppies can be cream or yellow. Some of these dogs have less curly hair than others, and their fur is often trimmed to an even length.

Their ears are long and droopy and their tails are of medium length too, which are left natural and not cropped. The Bichon Frise’s head and legs are proportionally sized to their bodies.

These playful dogs bring smiles wherever they go and love to be the centre of attention. While best with people, they can get on really well with other dogs if they are socialised from an early age. One great way to do this is obedience training, which is essential as while they learn fast, they can be very mischievous.

They are highly affectionate dogs and they love cuddling up with their owners and also get along well with children.

Be prepared to spend a lot on grooming! A Bichon Frise would need to have their hair tended to at least every eight weeks as they often get matted and dead hair gets caught up in the curly coat.

They have a reputation for separation anxiety – they need to be with their families and adjust well to different lifestyles but they don’t like being alone.

Is a Bichon Frise good for me?

If you are a cuddly person, then these dogs could be perfect for you as they love attention. However, as they don’t like to be left alone, this dog would be best suited to someone who spends a lot of time at home or someone who can take their dog to work with them.

Bichon Frise love to learn tricks and enjoy playing games so are great if you want a playful dog that can be easily trained. They can also generally be trusted not to run away, so can be an excellent dog for first-time dog owners.

Bichon Frise are good dogs to have if you suffer from allergies, as they are bred to be hypoallergenic.

Why not insure your Bichon Frise with Animal Friends? Visit our dog insurance page for more information.