Male and female up to 6.6lb 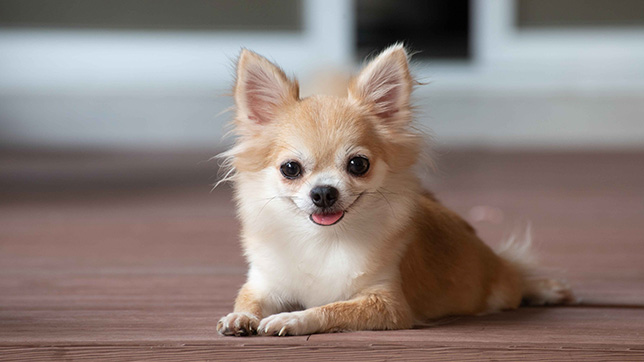 Folklore suggests that the Chihuahua originated in Mexico and was so-called because of its state with the same name. It is believed that the little dog, which is now one of the most popular breeds in Britain, was a descendant from the Techichi – a dog raised by the Aztecs. Statues and relics of these dogs were found in tombs. It is said that Aztec priests would sacrifice these dogs to lead dead souls.

Chihuahuas became more noticeable in North America in the mid-19th century. In 1928, the American breed club for Chihuahuas was founded.

One of the smallest existing dog breeds, the Chihuahua comes in two varieties: smooth coat (short-haired) and long coat. They come in a range of colours including wheat-coloured, cream, red, brown and white.

Generally, these versatile dogs have short bodies, weighing up to 6lb and ranging between 6 and 8.97lb in height.

Chihuahuas have big ears which are often erect and set apart. They have large apple-shaped heads, a short muzzle and a slightly pointed nose.

Personalities of Chihuahuas can be varied from happy to timid. But they all have one thing in common – they’re fiercely loyal to their owners and sport a big personality in a tiny frame.

They do have a tendency to bark a lot, particularly on the arrival of someone new to their home, so it is important to socialise these dogs early to prevent this from becoming a problem.

Content just to sit on your lap, this agile breed will attempt to mirror their owner’s moves but can become distressed when their owner leaves.

Chihuahuas can be fussy eaters but can easily put on weight if they’re overfed, which could potentially lead to obesity and other health problems. So, anyone looking towards this breed will need to ensure that their dog is on the correct diet.

They can be hard to train due to their strong-willed nature – so consistent training is essential. They can also be unpredictable around children at times, so it is best to keep an eye on them.

Is a Chihuahua good for me?

If you’re after a happy dog who does not require much exercise, then a Chihuahua could be the perfect pet for you!

Owners that are able to provide time to housetrain this dog, with lots of positive reinforcement and daily exercise, would be a well-suited companion for the Chihuahua.

When it is chilly outside, Chihuahuas should wear a special coat as they are susceptible to catching colds.

If you’re looking to protect your Chihuahua, make sure you check out our dog insurance more information.