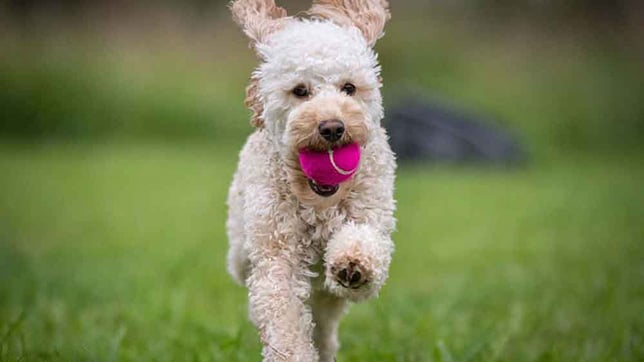 The Cockapoo is a popular designer crossbreed from the US, which came as a result of accidental breeding in the early 1960s. It is a relatively new breed to us here in the UK, arriving on British shores approximately a decade ago. This hybrid breed is the offspring of the Cocker Spaniel and Poodle, also known as Cockerpoos in some areas and Spoodles in Australia. One of its ancestors, the Cocker Spaniel, originated in Britain and was bred to hunt woodcock; it’s other ancestor, the Poodle, is commonly thought to be a French breed but in fact originated in Germany.

Cockapoos come in many sizes. The standard Cockapoo stands at around 15 inches tall; the Teacup Cockapoo is less than 10 inches tall; the Miniature Cockapoo between 10-14 inches. They are bright-eyed and scruffy-coated, and depending on its genes, the Cockapoo may look more like a Cocker Spaniel or more like a Poodle. Some dogs may have the curly coat of a Poodle and others may have much straighter and longer hair due to inheriting more of a Spaniel’s coat, however they typically have soft coats in tan, cream, or a mixture of white and brown (but can also be seen in red, black, and even silver).

Cockapoos are fantastic companion dogs and are most likely to be considered a member of the family rather than a ‘guard dog’. They get along with other dogs, cats, small furries and children too. You can expect Cockapoos to be fiercely loyal and intelligent, however this means they require more attention and more mental and physical stimulation than some other breeds. As a mix of two active breeds, a Cockapoo requires at least two lots of 30 minutes play and exercise a day. In terms of grooming, straighter coat types will need their coat brushing at least twice per week; for wavy/curly coat types, two to three times per week; and for tightly curled coat types, you might need to brush their coat every day to keep away tangles and mats.

Cockapoos are usually healthy, well-tempered dogs without many serious health problems. However, as they were bred to be companion dogs, they crave human company and can suffer from separation anxiety if left alone for too long. Cockapoos can also be prone to certain eye disorders and ear problems, as seen in many dog breeds with soft, floppy ears of this type. The ears should be cleaned weekly, with greater attention given if problems do develop.

Is a Cockapoo the breed for me?

If you are an outdoorsy type and are looking for an active and outgoing dog that doesn’t tend to bark, doesn’t smell and is easy to train, then you are in for a lifetime of loyal companionship! They are also a great option for people with allergies as they shed significantly less than other dog breeds. Cockapoos often need to eat more than other breeds due to their activity levels, however, so speak with your vet to ensure you are providing a fully balanced diet with all the essential nutrients.

A Cockapoo’s coat can change colour over time! They inherited the ‘fading gene’ from their ancestor, the Poodle, meaning that dark-coloured Cockapoos might fade to silver or grey all over when they age. We offer insurance cover for Cockerpoos from just 4 weeks old. Visit our dog insurance page to learn more.