How much does a Golden Retriever cost?

First distinguished in the 19th century, this breed began as a cross between a Black Wavy Coated Retriever and a Tweed Water Spaniel. The Golden Retriever name was established in the 1920s.

This breed of dog belongs to the Gun-dog breed group, which also includes Spaniels, Pointers and Setters. Read on to discover the price of a Golden Retriever, as well as the characteristics you can expect from this breed.

How much does a golden retriever cost?

The standard price for a puppy is approximately £500. However, to purchase one of these pets at a more mature age can cost around a grand.

Obviously, a Golden Retriever’s price is dependent on whether you are buying a pedigree dog from a reputable breeder, which would cost considerably more. 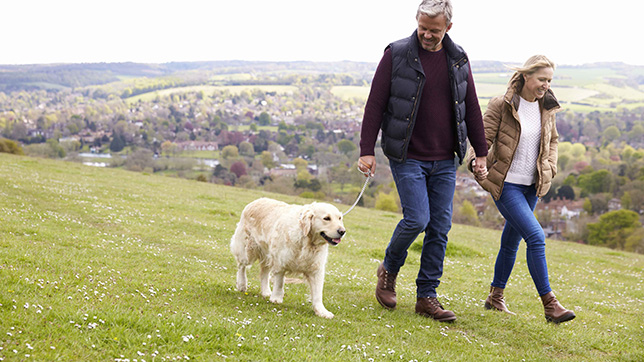 If you want to adopt a Golden Retriever, it’s important to have enough money set aside for things this breed requires on a daily basis. These include:

As puppies, Golden Retrievers usually eat two to three cups of dry food a day, split over two meals, whilst older members of this breed require around four to five cups of dog food a day.

A pound of dry food should usually fill around four cups, meaning that owners spend approximately £3 a day feeding their pets, whilst owners of puppies spend around £1.50.

After one year, puppies should begin to eat adult-sized portions, meaning that over the course of your Retriever’s lifetime, you would spend at least £12,500 on pet food alone, with a monthly cost of between £15-£30.

Golden Retrievers are widely renowned for being one of the most intelligent dog breeds. In fact, they’re considered the fourth most intelligent breed on the planet according to canine psychologists.

Their level of intelligence makes them incredibly obedient, meaning that they’re a fantastic addition to any household. This makes them inseparable from their owner, so they don’t require toys as much as other pets that are more distant and temperamental.

A few squeaky toys will be enough to entertain them when you’re away for an extended period, with the average one costing around £3.

Adding dog beds, collars and leads into the mix, can take your one-off cost for equipment to around the £200 mark.

Golden retrievers have a low susceptibility to illness, which is a benefit to owners for many reasons:

Despite their generally good health, this breed requires a number of things to maintain good well-being, including worming, flea treatment and neutering.

Neutering is done to eliminate the risk of testicular and breasts cancers, and this carries a one-off cost that ranges between £60-£120.

It’s recommended that Golden Retrievers are treated for worms quarterly, carrying an annual cost of around £60. Flea treatment costs around the same price and can be required more regularly.

Golden Retrievers are considered medium-sized dogs in regard to both their weight and height.

Their most distinctive quality is certainly their illustrious golden coat. However, as it’s so thick, this breed requires regular grooming, with the hair on their legs requiring plenty of attention to avoid tangling. Their topcoat doesn’t require any cutting, just brushing, as any water or mud they attract can be easily cleaned off when dried.

They aren’t the best dogs for families with members who have allergies as they’re heavy shedders.

You should be getting your dog groomed every six – eight weeks, which can cost owners £50 or more. This means owners will have to spend around £325- £430 on pet grooming annually.

Other costs to consider

There are a few more one-off costs that need to be considered when owning a pet for the first time. These include:

Golden Retrievers need to be vaccinated against many illnesses when they’re a puppy.

These include vaccinations for hepatitis, parainfluenza and canine distemper. You could expect to pay around £100-£120 for their first jabs, followed by boosters on an annual basis at a rate of £50-60. Owners are likely to spend around £650-£780 on vaccinations across their Retriever’s lifetime.