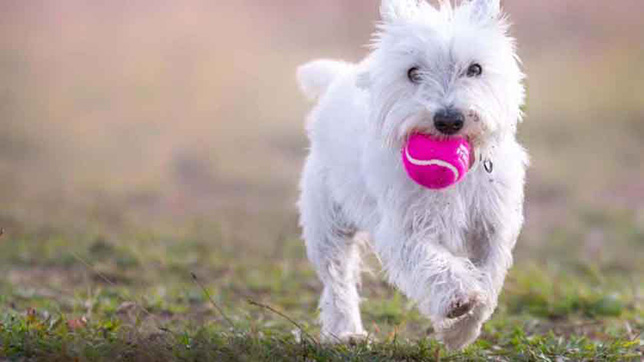 The West Highland Terrier originates in Scotland and was bred for hunting and killing small rodents. Affectionately known as the Westie, this breed is descended from the Scottish terrier group of dogs which can be traced back as far back as the 15th century.

It is believed that the Westie owes its existence to just one person; Colonel Malcolm, the 16th Laird of Poltalloch, was involved in a disastrous hunting accident, in which he accidentally shot one of his beloved dogs mistaking it for a fox. Determined to prevent this from ever happening again, Colonel Malcolm kept only white and cream coloured highland terriers because they were more visible out in the field.

Characterised by their pointy ears and compact stature, Westies are a robust little dog with a harsh white outer coat and a soft undercoat. They have dark, almond shaped eyes and a black nose, boasting muscular legs and a deep-set chest. A Westie’s skin colour is usually a light pink, however it’s not uncommon for their skin to turn black due to pigmentation or certain skin disorders.

Westies are bold, independent and courageous but are nevertheless a friendly breed of dog. They are happy-natured and lively yet are stubborn and are somewhat easy to train (when they feel like it!). They are alert and can be vocal when a stranger enters their territory, and can be dominant towards unknown dogs, particularly those of the same sex.

While they are all-round good family dogs, they would prefer to live in a home with older children. Westies are great fun to play with owing to their high level of activity and require a minimum of 30-60 minutes of exercise a day – two brisk walks will do the trick.

Westies love to bark and are natural watchdogs. The West Highland Terrier can be prone to minor health problems such as Atopic dermatitis which is a skin disease common in this breed, meaning they require a little more grooming attention; they need to be groomed approximately once a week and bathed every couple of weeks. The Westie tends to dig around frequently – it’s what they do best, so if given the chance they may create lots of holes in your garden!

Is a West Highland Terrier the breed for me?

Due to their chasing instincts, you need to watch out for Westies around small animals such as bunnies and guinea pigs; if you have small animals in your home, you may wish to consider another breed. However, if you live in a family home with older children, are after a dog that can be left alone for up to several hours a day, sheds very little, and doesn’t require a lot of exercise, the Westie would be the perfect pup for you. If you don’t mind the barking and the possible digging, there won’t be a dull moment with this charming little dog.

We offer insurance for West Highland Terriers from just 4 weeks old! Check out our dog insurance page to learn more.