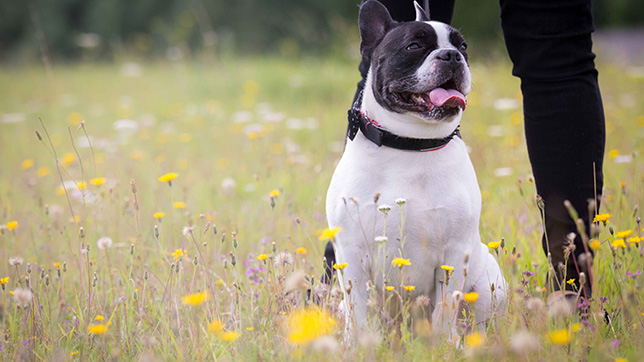 Despite its name, the French Bulldog breed actually originated in England, created to retain the looks of a bulldog but in a more compact size. The breed was particularly popular with lace makers based in Nottingham, but the advent of the industrial revolution left these artisans without work. When these specialised workers emigrated to pursue opportunities in France they took their pets with them. While the breed has always enjoyed a certain amount of popularity among aficionados, they have seen a surge recently, entering the top-ten in the UK and USA. They are a relatively rare breed, fetching prices in the thousands for a pedigree specimen.

These dogs are small but chunky, with a strong, muscular build. Their faces are short-snouted and they have bat-like upright ears, which many agree is a huge part of their charm. They can present in a number of colourways, such as red, black, brown, white and fawn. Their fur is short, fine and doesn’t shed a great deal, making them easy to maintain.

French Bulldogs are intelligent, fun-loving little creatures and will love training, as long as they see it as a game. They are very people-centric and love nothing more than spending time with their family as the centre of attention. This innate love for their owners also makes them rather protective, though they are unlikely to guard vocally. If they are brought up with children they can make a good family pet, especially as they are more robust than some other small breeds.

The flipside to being so adoring of their owners is that Frenchies can get jealous if they see “their people” playing with other dogs. This can, at best, cause a sulk, and at worst create an aggressive response. To counter this it is always wise to socialise a Frenchie very well from an early age to get them used to a variety of dogs and group dynamics.

As a brachycephalic breed French Bulldogs are predisposed to a few health concerns, such as elongated soft palettes, sleep apnoea and overheating. They do better in moderate weather, and will struggle to maintain a healthy temperature in hot weather. Being brachycephalic means they are also more likely to have stenotic nares, where the nostrils are pinched, causing respiratory issues. This may require surgical intervention to correct.

This breed is also predisposed to spinal trouble such as hemi-vertebrae and intervertebral disc degeneration due to their shortened, compact bodies. If you’re buying your puppy from a breeder you’d be best advised to ask them for the parents’ hip, knee and spine scores to stand your best chance of choosing a healthy puppy.

Is a French Bulldog for me?

If you’re looking for a small, energetic dog with distinctive looks and lots of love to give then this could be the breed for you!

The last royal family of Russia, the Romanovs, counted a French Bulldog called Ortino among their many pets. He was Princess Tatiana’s favourite dog and used to sleep in her bed, despite his terrible snoring!