French Bulldogs have several health conditions common to them, normally due to their shape and structure. One of the most common health conditions in this breed is Brachycephalic Obstructive Airway Syndrome (BOAS). BOAS is a syndrome that occurs due to the complications of having a shortened nose and muzzle causing breathing problems.

The French Bulldog’s narrow nostrils can cause increased resistance to the airflow into the nose, and the cartilage that supports the nostrils can also collapse. There is also usually an overlong and thickened soft palate that can partially obstruct the windpipe and causes the loud snoring sound typical to brachycephalic breeds. In some cases, it can cause complete respiratory obstruction.

Due to these abnormalities, brachycephalic breeds have to compensate by putting in more effort when breathing in and this creates strong negative pressures in their nose, throat and chest. This often causes secondary problems, and one of the most common ones is vomiting or regurgitating.

The tonsils and voice box can become very enlarged and this can further restrict airflow. As the soft palate can obstruct the windpipe in these breeds, often those affected will have trouble sleeping and may wake suddenly struggling to breathe.

It is important to keep this breed a healthy weight as being overweight can make their symptoms worse.

Dogs with this syndrome struggle to regulate their body temperature as well and therefore you should avoid walking them when temperatures are high. It is much better to time your walks for early morning or late evening when the air is cooler.

Over-exercising should also be avoided as they’re not able to cope with the increased demands on their heart and lungs.

Those severely affected by BOAS may require surgery to widen their nostrils and shorten the soft palate. It is important to never breed from a dog that has had BOAS, whether or not they have had surgery to correct it.

French Bulldogs are predisposed to developing skin conditions such as skin allergies. Things in the environment such as pollens, dust mites, and grasses can cause an allergic reaction. Usually, this is characterised by itching of the face, ears, armpits, paws, belly and groin.

Once an allergy develops it is important that it is managed as trauma from scratching can lead to things like skin infections. French Bulldogs can also be allergic to certain things in their diet and may require a food trial to determine the trigger. This should be done under veterinary guidance as they will require a specific veterinary hydrolysed protein diet.

French Bulldogs are also susceptible to skin fold dermatitis, where the skin within folds gets hot and humid and microorganisms like bacteria and fungi can grow into abnormal numbers triggering a skin infection. It is very important to clean and dry these folds daily to prevent an infection.

Ears can also be cleaned once weekly with an antimicrobial ear cleaner to reduce the amount of wax and debris within the ear. 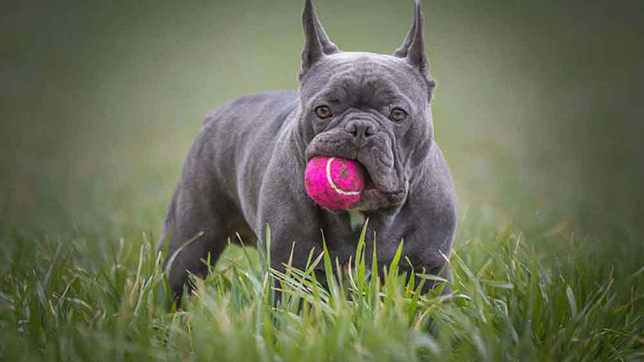 While corneal ulcers can occur due to genetics, they can also be caused by trauma, not shielding a dog’s eyes while grooming, an infection or because of a disease. These ulcers are often treated with antibiotics and an ointment.

Many French Bulldogs suffer from Dry Eye which occurs when they are unable to produce the tears needed to lubricate and protect the eye. This condition can lead to other problems with the eye, like corneal ulcers or irreversible scarring.

This is a condition, while sometimes caused by genetics, its cause can sometimes be prevented by making sure your pet is unable to injure their tear duct or keeping their eyes free of infection.

This can be treated with an immunosuppressive eye drop or regular application of false tears.

Entropion is when the eyelid turns in and the haired surface of the eyelid makes contact with the cornea causing irritation and damage to the eye. Because entropion is often a genetic condition in French Bulldogs, it can be seen while they are still puppies so owners should always check their dog’s eye for signs of discomfort, squinting and excessive tears.

Ointments can be prescribed to ease a dog’s discomfort and decrease damage to the cornea but this condition will often need surgery to correct the eyelid.