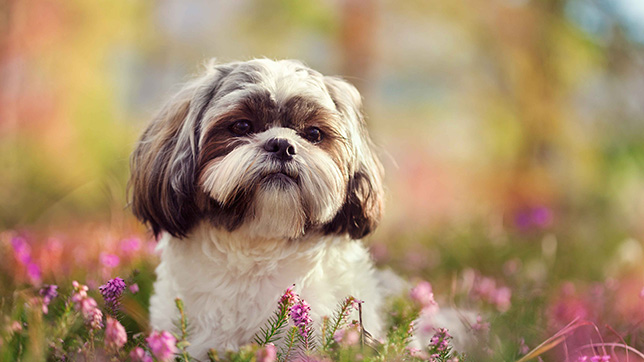 While the Shih Tzu has a long history from its native homeland of China, the exact origins of this wonderful dog are not entirely known. Many believe they have been around since the rule of the Tang Dynasty during the 3rd Century, but there are counter-claims that suggest they may have arrived into the country sometime during the 10th Century.

What is known for certain is that they are a direct descendant of the Lhasa Apso, which were highly regarded by Buddhist priests in Tibet for their lion-like features. These features continued to be prominent in the Shih Tzu, which explains the name of this breed, as Shih-Tzu in Chinese translates to “lion”.

Historically the Dalai Lama of Tibet used to give Lhasa Apso dogs as gifts to Chinese Emperors, so as a result Shih Tzus were almost exclusively owned and raised by the royal families of China. Unfortunately, this association with the royal family caused many of these dogs to be killed during the Chinese revolution.

The breed eventually made its way into Europe during the 1930s, with these dogs being formally recognised by their Chinese name with the founding of the Shih-Tzu Canine Club in 1935.

Shih Tzus are a small, sturdy breed that is often longer than they are tall. Their head is typically large and round, with a short, flat muzzle along with a black nose. They also have a flat skull between their eyes, which are large and rounded with dark colouring.

What makes the Shih Tzu such a distinctive breed is their long fur. It is double-layered, with a fluffy inner layer and a long, wavy outer layer that benefits from regular grooming to prevent tangles. The fur of a Shih Tzu can range from several colours or even a combination of colours. However, they will usually have a white patch on both their tail and their forehead.

The long, rich hair that grows from their face resembles a long beard and whiskers, with the hair from their noses growing upwards, which contributes greatly to their unique appearance. Their long ears droop down with thick hair that completely covers them. It is so thick that the hair from their ears seems to blend seamlessly with the fur on their neck.

This breed is affectionate and gentle, which makes them a perfect companion for families with children. They are also usually very sociable with other dogs and household pets thanks to their loving and jolly demeanour.

They are also known to be proud and stubborn, which is why Shih Tzus respond well to persistent training, with a lot of patience needed from their owner.

Shih Tzus are not the most active breed but still require regular exercise. However, they are often content with short walks which may be ideal for owners who can’t regularly spare the time for long walks. They also require a lot of love and care, with plenty of training and socialisation to help them settle into a household dynamic.

This breed also needs daily brushing to keep their fur clean and untangled. If there are time constraints that prevent daily grooming, Shih Tzus can have their fur trimmed every two months. Shih Tzus can also suffer from issues with their ears which means they require regular cleaning and check-ups.