Males and females to 55lbs 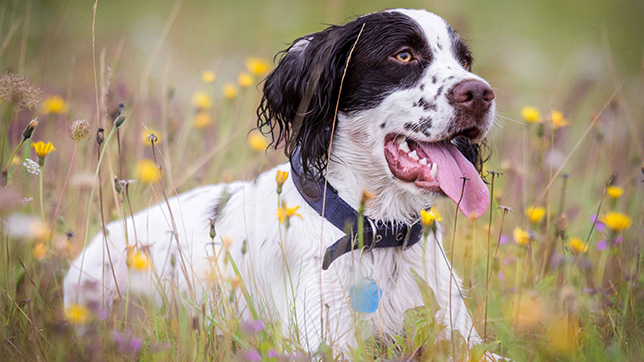 Spaniels as a group are named for the fact that they originated in Spain. As a whole they were brought to England on trading ships and there are records of Spaniels being in Wales as early as 300AD. Originally bred as a working dog, puppies from the same litter would be split and grouped by size with the smaller ones being used to chase woodcocks and the larger one for general use, springing the larger game. This led to the two being distinguished as Cocker Spaniels and Springer Spaniels and the divergence of the two breeds.

The breed was officially recognised by the Kennel Club in 1902 and has since enjoyed popularity in the UK, US and Canada.

Springer Spaniels have developed a double-layered coat to protect them against all weathers, water and thorns. Their longer topcoat can be straight or wavy and their fur is generally soft and smooth throughout their lives. They have feathering around their ears and chest and sometimes down the back of the legs and around their paws.

While Springers come in a variety of colours and combinations they are best known for the liver and white and black and white types. They also come in a blue and liver roan. They tend to be split between field and show types; show types are more colour than white and field types are more white than coloured.

Springers are friendly and obedient as well as being very eager to please. They do get very attached to their owners and won’t like to be left alone for long as they may become anxious.

Springers have a very keen sense of smell and a lot of energy. They are very speedy and love to chase things, in fact the only time they are likely to disobey their owners is in pursuit of squirrels!

Their floppy ears can block air circulation and become a bit of a breeding ground for mites and bacteria. Make sure you check them regularly, dry them after swimming or rainy walks and clean as necessary.

As they get older Springers will become less tolerant of rough handling so may not get on as well with young, boisterous children or dogs.

Is a Springer Spaniel for me?

If you like a good daily walk and are able to have your dog with you most of the time then you are more than likely to get along swimmingly with this active, loving breed. We do advocate always choosing a breed, breeder and puppy with care to ensure the best possible fit for you and your new friend.

Scottish hero William Wallace had a Springer Spaniel named Merlin who used to assist him in battle.

We will look to insure Springer Spaniels from five weeks of age. Why not visit our dog insurance page for more information?