Males and females up to 37.4lbs 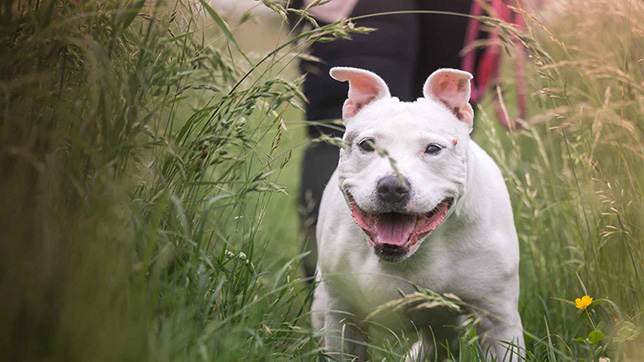 The Staffordshire Bull Terrier (or “Staffy”) came from crossbreeding of the Bulldog, the Fox Terrier and the White English Terrier. It was recognised as a breed in 1935 and was originally developed in the 19th century for dogfighting – a dangerous and cruel activity that is now banned and illegal in the UK.

Since the ban on dogfighting, Staffordshire Bull Terriers have gained recognition to become a fantastic companion dog. In more recent years, this dog breed has been chosen by pet parents looking for a loving and loyal pet.

The Staffordshire Bull Terrier is a strong and stocky dog of a medium build. Not only do they have a wide chest, but they have a powerful stance and posture.

When it comes to facial features, they have a wrinkled forehead and a broad, short skull with small ears and a thick neck. It is these qualities that give the Staffordshire Bull Terrier their strong, muscular look.

A Staffordshire Bull Terrier often has short hair and its coat boasts many varieties including red, fawn, light brown, white, blue, black or brown and brindle.

Despite being an incredibly brave and fearless dog, the Staffy is a very loyal dog breed and has a very high tolerance, especially when it comes to young children.

These dogs can also be calm and very obedient, making them easy to train. They are very quick to learn but can often be very stubborn, meaning that they are recommended to people who have experience of looking after dogs. They also enjoy playing and once tired out, will keep calm when brought back into the house.

Is the staffordshire bull terrier for me?

If you’ve got plenty of time to cope with stubbornness and you’re looking for a loyal companion dog that loves exercising, a Staffordshire Bull Terrier may be the perfect breed for you!

It is a breed that requires frequent exercise, this means you’ll need to dedicate enough time to regularly walk them and provide them with ways to release their energy.

Because of their short hair, they require less grooming than other breeds and only need to be brushed occasionally.

They’re nicknamed the “nanny dog” because of its reputation as a fantastic companion and guardian of children.