Aggression is quite possibly the most known and talked about type of negative behaviour that a dog can display. 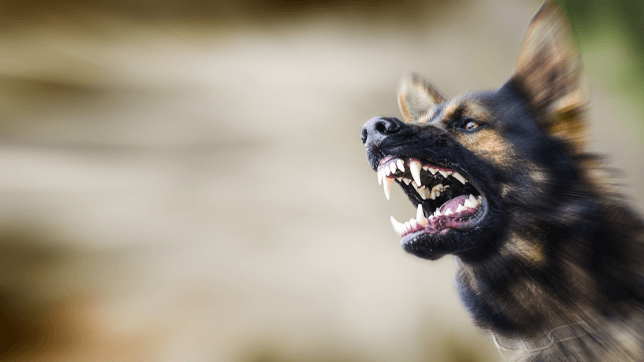 In recent years there has been a great deal of news coverage concerning dangerous dogs that exhibit aggression towards other dogs and sometimes small children; often with severe and fatal consequences for both the child and the dog.

Fear, anxiety, confusion and hormones can all play a part in making a dog act aggressively. A key point when talking about aggression in dogs is that it is not simply a reaction that the dog has; there are many factors that can shape a dog to behave in a certain way.

Poor training can cause confliction in how a dog thinks. Dogs learn using a combination of repetition, communication and association and if they have been taught in a way that scares or confuses them then they may develop an aggressive personality.

Puppies that have had an aggressive mother can also develop an aggressive personality. Once a dog has truly learnt something then that behaviour will become a part of its drive and instinct; any aggressive behaviour developed as a result of poor training can be hard to break.

Socialisation can also play a central part in in the development of aggressive behaviour. If a dog is not socialised properly with humans or other dogs at an early age then it can cause all sorts of behavioural problems.

Whilst aggression in a dog can be traced back to its training and past life experiences, there is also the somewhat redundant viewpoint that certain breeds of dogs are just more aggressive in nature.

The Dangerous Dogs Act (DDA) of 1991 lists breeds of dogs that are considered to be dangerous and considerably more aggressive than other dog breeds. This accredits the belief that there are some breeds of dog that cannot have their breed-specific aggressive tendencies removed through behavioural modification

However, it is worth noting that an overwhelming amount of dog experts, owners and psychologists are calling for the DDA to be amended, shifting the focus and blame from the types of dog breed to the owners themselves.

Being human, we have a drive and need to understand. As a result we are constantly analysing the behaviour of ourselves, other species and our pets.

It is important to remember from time to time that no matter how much training, preparation or analysis you put in to training a dog, sometimes accidents or tragedies can simply happen. A dog can be extremely well trained and have a gentle nature/disposition but still snap at a small child.

As aggression can occur due to a large amount of reasons, it is hard to pinpoint what exactly drives dogs to be aggressive.

Dog owners should concentrate on the communication between themselves and their dog so that they can tell how a dog is feeling or responding to any given situation. This in turn can help the owner to reduce any fear, anxiety or misunderstanding that might cause a dog to become aggressive.