Males and females up to 45lbs 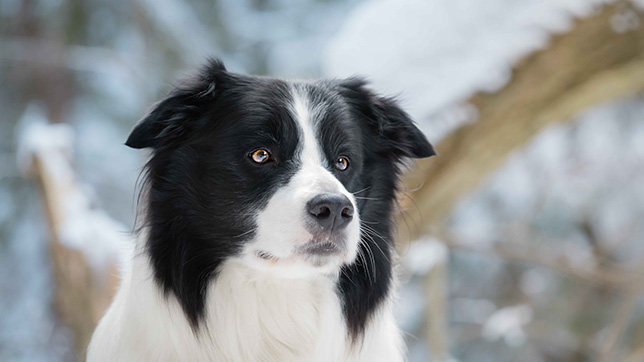 The Border Collie as we know it today was originally developed in the counties between Scotland and England during the 19th century however, their ancestral predecessors, Sheepdogs, have been recorded in Britain as far back as 27B.C. They were bred for their intelligence and athletic abilities to help farmers guard and herd their sheep.

Queen Victoria became quite fond of the breed following a trip to Balmoral, which has likely contributed to its popularity over the years.

Today the Border Collie is recognised as one of the top herding dogs but are kept as pets as the same traits that make them great working dogs have helped them gain widespread popularity as family pets.

The Border Collie was recognized by the UK Kennel Club in the early 1970s and on October 1, 1995 by the American Kennel Club.

Border Collies are medium-sized dogs with an athletic appearance and often have deep and thoughtful eyes on a broad head. Their double coat comes in a variety of lengths and colours but is often known for its distinctive black and white markings.

Other popular colours include: red and white, tri-colour, blue merle, red merle, slate and white and lilac and white.

Their coats should be groomed routinely with regular weekly brushing to keep the coat free of tangles and debris.

A Collie’s ears are medium in size, set apart with tips that often fold over but tend to prick up when their interest is piqued.

Border Collies are intelligent and loving animals and with the right training, they can become extremely well-balanced and even sensitive dogs.

This breed is affectionate and loyal and gets along well with both other animals and strangers. Because they were originally bred to work with animals, their strong herding instinct can become directed towards children, pets and even cars.

They are often obedient, making them easy to train. Because of this, it’s important to keep their minds stimulated as they can become bored and destructive without the proper training and challenges to keep them occupied.

Border Collies are often very sensitive to noise and will alert you to new sounds in their environment such as visitors, passers-by or other movements outside of their home.

Their herding behaviour might lead to altercations if you have existing pets in your home but training, exercise and enrichment can help prevent this behaviour from developing.

Is a border collie right for me?

Border Collies can make fantastic family dogs as long as they are provided with the proper training and their exercise needs are met. As they have a relatively high activity level, their owner should be able to provide their dog with daily exercise and with plenty of stimulation at home to keep their minds busy.

If you ask Alexa what’s the smartest breed of dog she might tell you it’s a Border Collie!