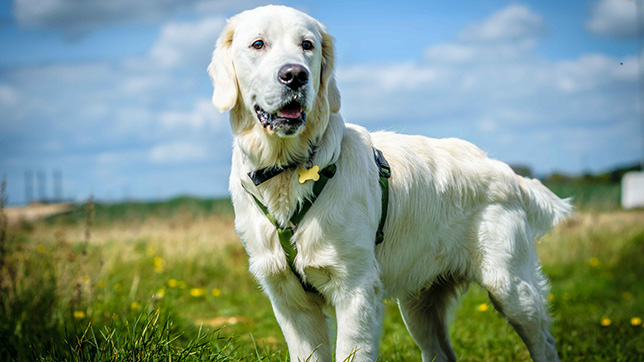 Males and females up to 74.8lbs

Golden Retrievers were originally bred in Scotland during the 19th century in order for hunters to have a dog which could retrieve wildfowl that had been hunted on both land and water.

This dog breed is a result of crossbreeding between several different dogs, including Tweed Water Spaniels, reddish Setters and the straight hair Retrievers.

The Golden Retriever has been a registered breed with The Kennel Club of England since 1903. It has since become one of the most popular dog breeds in the world due to its nice temperament and caring qualities.

The Golden Retriever is relatively large in size and has a broad head with a dark brown nose. Their snouts are prominent and sit below large oval eyes.

As the name suggests, Golden Retrievers are golden in colour and often can be found with a white mark on their chest. They have slightly thicker, wavier fur around areas such as the neck, feed, chest, abdomen and tail.

Golden Retrievers are intelligent and loving animals. Despite their larger size, they’re extremely well-balanced and can be very sensitive.

This breed is affectionate and loyal and gets along well with both other animals and strangers. Because they were originally bred to retrieve things, they have a soft mouth that isn’t used for aggression and are fantastic companions.

The Golden Retriever has a fantastic memory and is extremely obedient, making it a delight to train. They learn easily and although training should be gentle, it’s not a huge task to train the dog.

Because this breed has a very loving and trusting temperament, the Golden Retriever is able to get along with other animals that you may already have in your home.

Because of their long double-layered hair, Golden Retrievers require frequent grooming to remove the dead fur and prevent matting. Hair should also be clipped from around the footpads as this can cause discomfort for the dog when it becomes too long.

Golden Retrievers also have the tendency to work until they’re exhausted, so it’s important that the breed is not overworked and given the opportunity to rest after strenuous exercise.

Is a Golden Retriever for me?

If you’re looking for a loving, family-friendly dog that can be easily trained, the Golden Retriever may be the best option for you!

They are a fantastic first-time family dog and are ideal for homes with children. As they have a relatively high activity level, their owner should be able to provide the Golden Retriever with daily exercise.

The Golden Retriever has been ranked fourth as one of the smartest dogs in the world by Stanley Coren’s book The Intelligence of Dogs!

Remember to get insurance for your golden retriever, to protect you from any unexpected costs.