We focused heavily on the importance of water this summer, as the hot weather can cause dehydration. However, having the heating on throughout winter can make your house a bit warm for furry family members. Providing your pet with clean, fresh water is crucial, and we’ve discovered a new bit of kit that makes it easier than ever to make sure this most basic need is met.

What is the Torus bowl?

We tested the Torus bowl on marketing department Labrador, Buffy. The Torus is billed as “the smarter way of thinking for pet drinking”. Despite its sleek, techy appearance it’s very easy to use. Instead of filling the bowl directly, and leaving water standing in the bowl until it has been consumed or needs replacing, the Torus features a reservoir in its rim. As the bowl itself empties, water flows out of the rim through a carbon filter to replenish the supply. This means that the water is free of debris and contaminants, as well as staying cool. The bowl Buffy tested had a 2l capacity, but there is a smaller edition suitable for cats and small dogs which can be filled up to 1l.

What features does it have?

The bowl comes in a number of colours, and the design is fresh and modern. The bowl itself is relatively light until it is filled, but is still wide and study with a grippy base, so you needn’t worry about spills.

The filter cartridge is simple to insert, and the whole bowl is delivered in three easy-to-assemble pieces with comprehensive instructions for usage. The bowl can be filled form a tap, jug or hose, so accessibility isn’t as issue. The manufacturer’s advice also claims that the bowl is travel-safe, though we didn’t test this out ourselves. It also comes with a 12 month warrantee, though mine has been absolutely fine, so I don’t see any danger of needing that!

In terms of functionality and style, we have no cause for complaint or argument. The bowl looks great, and does its job well. The price is a little higher than you’d pay for a bog standard dog bowl, but that’s because this isn’t a standard bowl. RRP from the torus website itself is £35.99 for the larger bowl, £32.99 for the smaller model and £12.99 for a pack of 5 replacement filters. These filters are intended to last for a month, so after the purchase price of the bowl it’s going to cost you around £2.60 a month to keep the bowl running, which is something to bear in mind! Also, as the whole body is opaque, you can’t just look to see if the rim is empty, and the water level isn’t enormously high, so if you’re going to leave the house for a little while, I’d refill the whole rim just in case it’s not as full as you thought! 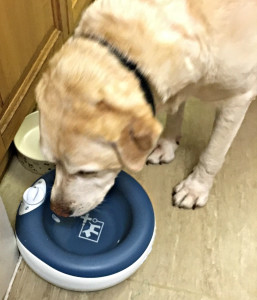 What did Buffy think?

Buffy is an older dog who is slightly set in her ways, and there was a hairy moment (no pun intended) when I thought she just wouldn’t understand what the bowl was for. I needn’t have worried though, she took to it very quickly and I’ve actually found that having a lower water level that replenishes, rather than a constantly deep, full dish, there are fewer splashy little water puddles around the bowl area from her messy slurping, so that’s an added bonus for me! I also wondered if it was a little large for our visiting dog, Pedro the chihuahua, but he’s had no problem with it either! Realistically though, I would probably buy a smaller one if I has a little breed living with me full-time. 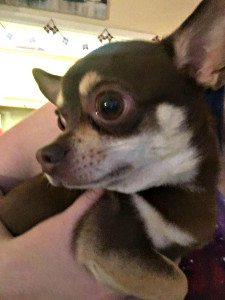 The Torus bowl is a lovely bit of kit, and it’s certainly been a hit with my household and dog! It works like a dream, is very simple to use at all stages and, while the price tag would be a bit steep for any other dog bowl, I don’t object to it based on the overall performance of this product.