These sizes can vary dependant on the breeds parents, the dog’s sex and some can be larger or smaller than expected in those size categories.

Approximately 10-14 years dependant on the pet’s lifestyle or health issues. 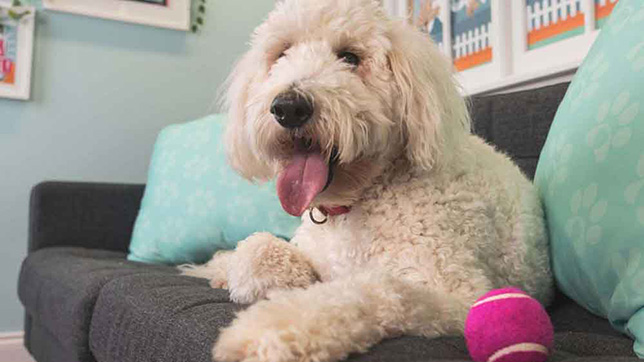 The Labradoodle is a cross between a Poodle and a Labrador Retriever and was originally created in Australia by The Royal Guide Dog Association in 1989 for a blind woman who couldn’t have a guide dog due to her husband’s allergy to dogs. The breed became increasingly fashionable and popular due to their hypoallergenic coat and gentle, trainable nature.

Labradoodles can differ in appearance dependant on their parents and their size. The breed size may vary dependant on whether the poodle parent is a miniature, medium or a standard poodle.

All Labradoodles tend to have a shaggy coat which is inherited from the poodle side of the breed but can vary in texture, from soft, wavy and flat hair to a curlier and frizzier coat. The breed can also have a variety of patterns and colours include:

Labradoodles can be strong swimmers and enjoy being in the water. The breed is generally known for being amongst one of the most intelligent dog breeds, they can be energetic, easily trainable, friendly but protective of their family. They usually get along well with other animals and children but can be shy or cautious around strangers.

The breed can be known for their barking, especially around people who they might not know. They rely on the company of humans so can get lonely if they are left alone for too long. Due to the nature of their coat, they do require regular haircuts and general brushing

Is the labradoodle good for me?

The breed is known to be very loyal and they need an owner that is happy for them to be needy around and can give them the attention that they desire.

Due to their clever temperament, they are easy to train and are ideal for families with children and other pets.

Their coat is deemed hypoallergenic due to the lack of shedding which makes them popular for owners with allergies such as Asthma. However, their coat could be classed as high maintenance compared to other dog breeds where it needs to be regularly cut and brushed to avoid tight knots, dreadlocks and general fur untidiness. Owners will need to commit to spending time brushing their Labradoodle, grooming and removing plant debris such as foxtails and barbed seeds after walks.

The perfect owner for a Labradoodle is ideally someone who can take their dog to work or spends a lot of time at home. The owner should be able to commit to grooming them regularly, walking them a moderate amount and to give them enough attention as well as training to stop them from becoming restless or bored.

The first recorded use of the name “Labradoodle” is by Donald Campbell (of the Land and water world speed records fame) when describing his Labrador/Poodle crossbreed in his book “Into the Water Barrier”, published in 1955.