Your Jack Russell Terrier should not have stinky breath. Dental disease starts with tartar build-up on the teeth and progresses to painful infection of the gums and roots of the teeth. If a dog has poor oral health, they may eventually lose their teeth and develop further health problems with their kidneys, liver, heart and even joints.

Regular cleaning of your dog’s teeth is extremely important – at least three times a week! With a bit of patience and practice, you can clean your dog’s teeth daily. There are a variety of doggie toothbrushes and pastes on the market. There are also mouth rinses, diets and chews that can help keep your pooch’s teeth and gums happy and healthy. Additionally, you can book in with your vet to have your dog’s teeth cleaned professionally.

Jack Russells are a breed known to have some sort of dental abnormalities. The condition and its severity can differ between each dog, but common abnormalities include:

Braces and extraction of problem teeth can be used to correct these conditions.

Obesity in pets can lead to other health issues and is likely to impair their quality of life compared to a dog that is of a healthy weight.

Glaucoma is an extremely painful disease that rapidly leads to blindness if left untreated. Signs of this condition include hazy eyes, squinting, watery eyes, being head shy, pressing their head against objects to relieve pressure or tilting of the head.

Pain is rarely noticed by pet owners though it is frequently there and can be severe. In advanced cases, the eye may look enlarged or swollen like it is bulging. Glaucoma is a medical emergency so if you see symptoms make sure to seek veterinary attention immediately.

Cataracts are a common cause of blindness in older Jack Russells. Watch for the lenses of your Jack Russell’s eyes becoming more cloudy than clear. Many dogs adjust to vision loss just fine.

Primary Lens Luxation (PLL) is an inherited disease, common in Jack Russells, that causes tiny fibres that hold the lens suspended within the eye to degrade and break. When this happens, the lens can drop out of place. If the lens falls forward, it can block the normal circulation in the eye and cause  secondary glaucoma. Surgery to remove the lens may be required.

A Jack Russell is more likely to suffer from a liver disorder known as portosystemic shunt (PSS), which deprives the liver of the blood flow it needs to grow and function properly.

A liver function test can be performed to check for this problem but this is especially important before an anaesthetic. Symptoms include stunted growth, seizures or straining to urinate (if bladder stones have formed, you may also see blood). A liver ultrasound and surgery may be required. Some causes can be managed with a special diet and medication.

Cushing’s disease is a condition where the dog’s adrenal glands produce too much steroid hormone and is fairly common in older dogs. While the early signs are easy to miss, symptoms include increased drinking, urinating more often, hair loss, weight gain, bald patches, increased appetite, and a potbelly.

Treatment includes an oral medication and close coordination with your vet to achieve correct dosing and monitoring.

Your pet’s gums will look whitish or yellow instead of the normal bright pink colour. If the immune system destroys platelets, their blood won’t clot properly and they’ll have bruises or abnormal bleeding.

To slow or stop the immune system’s destruction of cells, you’ll be prescribed steroids and other immune-suppressive drugs.

Jack Russells are more likely to develop stones that can form in the kidneys or bladder. Vets sometimes recommend regular (6-12 month) urine testing for any indication of presence. They are painful! If your dog has blood in his urine, can’t urinate or is straining, this is a medical emergency.

Several different musculoskeletal problems have been reported in Jack Russell Terriers but they can all be diagnosed, treated and managed. With diligent observation at home and knowledge about the diseases that may affect your pet’s bones, joints, or muscles, you will be able to take great care of them throughout his life.

Sometimes your JRT’s Jack Russell’s kneecap (patella) may slip out of place. This is called patellar luxation. You might notice that, while running, your pet suddenly picks up a back leg or skips and hops for a few strides. They might then kick their leg out sideways to pop the kneecap back in place. These are common signs of patellar luxation. Again, weight control helps reduce the severity of patella luxation.

Hip and elbow dysplasia is a common problem in dogs and causes the joints to develop improperly while they are pups. Stiffness in your Jack Russell’s elbows and hips may become a problem, especially as they mature. You may notice lameness or difficulty getting up from lying down.

Arthritis can be treated, but sooner is better than later to help minimize discomfort and pain. Overweight dogs may develop arthritis years earlier than those of normal weight, so making sure you stick to a balanced diet and strict exercise regime is key to help avoid obesity-related conditions.

Some young Jack Russells may be prone to a hip condition called Legg-Calve-Perthes Disease, which is a painful and degenerative genetic disease. The exact cause is not completely understood, although thought to be a problem with blood supply to the hip, which causes the femoral head to become brittle and easily fractured. This often requires surgery. 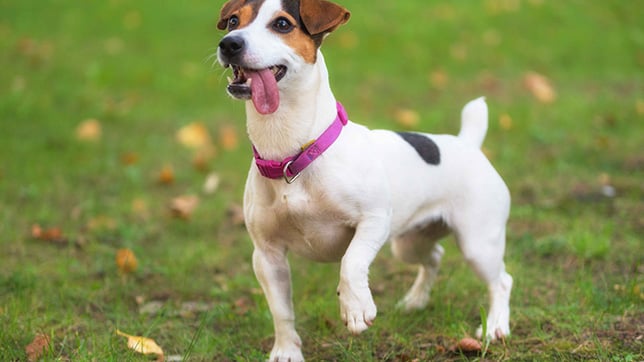 As in humans, an allergy to pollen, mould or dust can cause sneezing and itchy eyes. Rather than a sneeze, allergies can make a dog skin itchy. We call this ‘atopy’ and Jack Russells are prone to it unfortunately.

Symptoms start between the ages of one and three, and frequent ear infections are the most common sign.

Dogs can suffer from three different types of seizures: reactive, secondary and primary. Reactive seizures are caused by the brain’s reaction to a metabolic problem like low blood sugar, organ failure, or a toxin.

Secondary seizures are the result of a brain tumour, stroke or trauma.

Seizures that have no known cause are known as primary seizures or idiopathic epilepsy.

This problem is often an inherited condition with Jack Russells and symptoms usually start between six months to three years of age. Diagnostic workup is required to rule out other causes. Lifelong medication may be used to manage severe cases, as well as periodic blood testing.

Lots of dogs enjoy a healthy game of “chase the tail.” However, for some Jack Russells, this can become a repetitive, compulsive neurologic disorder similar in some ways to a seizure, during which the dog may injure himself.

If your pet starts to chase or is showing a little too much interest in their tail try to distract them with one of their toys or invite them to play another game. If caught early, it can be prevented with special behaviour training. Various medications may also be needed.

Some Jack Russells inherit a condition known as pulmonic stenosis. This genetic disease causes the pulmonic artery or valve to be improperly formed, causing partial obstruction of blood flow from the heart to the lungs. If the condition is severe enough, your dog may faint or show low tolerance for exercise.

Your vet will listen for heart murmurs and abnormal heart rhythms during an examination. When indicated, diagnostic tests may be required, such as X-rays, an ECG, or an echocardiogram.

Detection of heart disease often allows for early treatment intervention that can prolong your pet’s life. Surgery may be an option for severe cases. Signs of this condition include:

Mast Cell Tumours are a particularly nasty time of skin cancer found more often in Jack Russells. The sooner they are surgically removed, the better. The issue is, Mast Cell Tumours often look like other kinds of skin lumps and lesions, some of which are harmful, and others not.

All suspicious lumps should be tested and any questionable lumps should be surgically removed as soon as possible. Many cancers are cured by surgical removal, so early detection and removal are critical.

Heritable deafness has been noted in some Jack Russell bloodlines, so if his ears are healthy and they’re still ignoring you, a more thorough hearing checkup may be needed, including brainwave analysis, if indicated. If you suspect your dog may not be hearing as well as they should, consult your vet right away as the problem could also be caused by a severe ear infection.

Jack Russells are very smart dogs with lots of energy, so keep their mind and body active, or they’ll get bored. That’s when the naughty stuff starts.

Hiding food and using toys for enrichment from an early age can help keep your dog happy and healthy. Teach your dog to play hide and seek, or hide their toy and teach them to find it. Scent training is an amazing way to get your Jack Russell to think for itself.

Ensure your Jack Russell Terrier is getting plenty of exercise, without overdoing it.

Consider a puppy play date with a friend’s or neighbour’s dog, teach fetch or enjoy long walks and adventures with your dog.