The pancreas is an organ near the stomach that helps with the digestion of food. The pancreas also releases important hormones, like insulin, to help regulate your dog’s blood sugar. Pancreatitis is the inflammation and swelling of the organ and can be a potentially life-threatening condition.

The condition can range from mild to severe and most commonly affects middle-aged to older dogs, with the symptoms shown and treatment given depending on how they are affected.

We often see claims for other conditions that affect the pancreas including Exocrine Pancreatic Insufficiency (not producing enough enzymes to break down food). 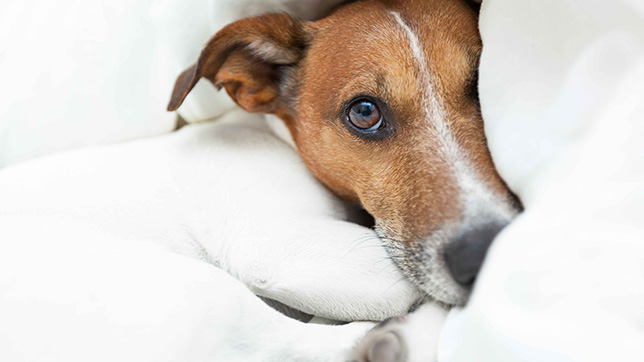 As the condition can vary so drastically the signs can range from mild symptoms to very severe illness but often include:

As so many other conditions can also cause these symptoms, a blood test and ultrasound scan are usually necessary to be able to confirm pancreatitis and treat the condition accordingly.

Pancreatitis usually occurs with no underlying cause, but dogs can be at a higher risk if:

Other conditions, like Cushing’s disease, can increase the likelihood of a dog developing an inflamed and irritated pancreas.

There’s no foolproof way of preventing pancreatitis in dogs but there is no harm in keeping an eye on their diet to make sure they’re not having too much high-fat food or scavenging when they shouldn’t be. Dogs don’t need to eat the same food as us, so try not to feed them treats from the table or give them human food scraps as this can lead to other issues, too.

If your dog’s pancreatitis is caused by another condition, a vet is likely to treat it first. Otherwise, most dogs will need to be hospitalised and provided with an intravenous drip and given medication to combat their nausea and pain if necessary.

Most dogs go on to make full recoveries, but might be prescribed or recommended special diets, especially if they have had several episodes of pancreatitis.

If you’re worried about your dog’s behaviour why not speak to a Joii vet? This is free for Animal Friends cat and dog policyholders.